The Large Magellanic Cloud  contains many regions where new stars are born. One of them is shown in this new image above. The image was taken with a telescope called the Very Large Telescope, which is based in a country in South America called Chile.

The star-making factory is found inside the red ring. (Click on the image to see the full ring.) This is a cloud of gas and dust, which is called a ‘Super-bubble’. The Super-bubble’s ring shape is due to a combination of destructive events. Fierce winds from massive stars and the explosions of dying stars have hollowed-out the centre of the cloud, leaving just a ring of gas and dust.

The width of the Super-bubble is more than 60 times larger than the distance from the Sun to the next nearest star! 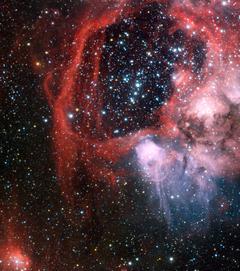 eso1125a
Blowing Bubbles around our Galaxy!