If you were playing the card game Top Trumps about the different types of stars in the Universe, you would definitely want a Yellow Hyper-Giant star in your hand. Just take a look at the stats for the Yellow Hyper-Giant shown in this photo: It is about 20 times heavier, 1000 times wider and it shines 500,000 times more brightly than the Sun! You would be incredibly lucky to be dealt a card like this, though, as Yellow Hyper-Giant stars are very rare.

Let´s take a closer look at the size of the Yellow Hyper-Giant star shown here: If you replaced our Sun with this star, the Earth would lie deep inside it and the planet Jupiter would be orbiting just above its surface! Meanwhile, the surrounding shell of dust and gas (shown in the photo as a darker ring around the white star) would reach far beyond the outer planet Neptune!

While this star has always been heavy, it wasn’t always as wide as it is today. When the star was burning hydrogen fuel in order to shine brightly – like our Sun does now – it was much smaller in size. But when it ran out of this fuel, the star expanded and grew into a huge Red Super-Giant star. It then later became a Yellow Hyper-Giant star, which are much brighter than Red Super-Giants.

When the Sun runs out of fuel in about 5 billion years, it will grow in size and become a Red Giant star, which are smaller than Red Super-Giants. However, the Sun will still be big enough that it will swallow the Earth! 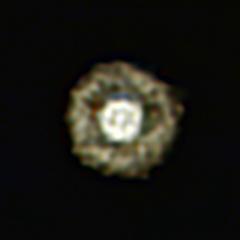