Astronomers have made a step towards understanding the most powerful engines in the Universe: black holes. But how can black holes be engines if they just gobble up material? Well, black holes are actually valuable members of our cosmic society, which give a lot of energy back to the Universe too!

In the artist’s drawing above, a black hole is swallowing material from a nearby star behind it. Before disappearing forever, the material from the star is accelerated to very high speeds around the black hole. This fast-moving material gives off energy as X-rays, which is released into space. Meanwhile, the black hole also releases energy through powerful jets of material that shoot out from above and below.

Not all black holes release their energy in the same way. This has baffled astronomers for a long time. The problem lies in the relationship between the amount of energy released as X-rays and the amount given off as jets of material. To begin with, astronomers had thought that this relationship was the same for all the black holes. But then oddballs started to be discovered.

As the numbers of oddballs grew, it seemed that there were actually two types of black hole engine, which work in a slightly different way. It’s as if one engine uses petrol while the other one runs on diesel!

Now, astronomers have observed black holes that seem to switch from acting like they have one type of engine to the other. This suggests that there are not different types of black hole engine, but that each one can run in two different ways.

The opposite of a black hole is called a white hole. Nothing – not even light – can enter a white hole, but stuff can escape from one! However, white holes probably don’t exist in the real Universe – it’s just one solution to a very difficult maths problem! 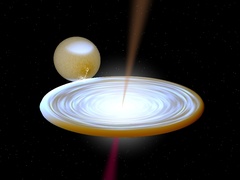 ras_changing_gears
Black Holes that can Move Up a Gear!