We happily announce the five winners of the Telescope Competition 2017! Their entries will be rewarded with a Bresser Refractor telescope, to be used in activities for outreach and education. A total of 51 entries have been judged on creativity, impact, feasibility and sustainability of project.

Five submissions have been selected that best described how and where the telescope will be used to inspire under-served children with astronomy. Priority has been given to activities that took gender into account and that paid special attention to the inclusion of girls in astronomy.

The five best entries have been rewarded with a Bresser 80/900 refractor telescope. The telescope comes complete with a telescope tube, viewfinder, zenith prism, two accompanying eyepieces and a custom-built mount.

The Bresser Refractor telescopes have been donated by the following people:

This competition has been made possible by the Belgian initiative Sterren Schitteren voor Iedereen and Science 4 Girls in collaboration with Universe Awareness. These projects are dedicated to inspiring disadvantaged children with science and astronomy. The telescopes have been built by Werkgroep Kijkerbouw of the Public Observatory Armand Pien.

For those who have participated in the competition but didn’t win, we have been told that “great things are planned for ‘Stars Shine…’.” So don’t be surprised to be contacted at a later date!

Winners will be sent a telescope (in several packages) with a tracking number. Information about the educational value of the telescope will be included. The recipient of the telescope will be responsible for any local expenses (like customs taxes). It is not possible to resend the telescope, so accurate address and contact phone number should be provided. Results of the competition are final and not open for discussion.

These are the five winners and highlights of their submissions (in no particular order):

Dinelsa, National Coordinator at UNAWE Mozambique, will use the telescope at two-day astronomy events each month, to foster education and to introduce science and technology to young pupils. These events will be not just for students, but also their parents: “In Mozambique there is a lack of activities involving science, education and gender. Also, there is a big challenge to keep girls in schools mainly due to premature marriages. These events will allow the pupils and their parents to see that there are other options for girls besides being married at such an early age.”

At a later stage, the project will be expanded by organising similar activities in Niassa, Cabo-Delgado, Nampula, Tete and Sofala, where are there are high levels of school abandonment by girls.

The telescope will visit elementary schools in the Jabal Awliya area on the outskirts of Khartoum on a weekly basis. Since the schools lack science clubs, new Space Clubs will be established these schools. The telescope will also play a central role in an annual contest for children with the highest marks in physics, where they can win exclusive nights with the telescopes.

Lastly, the Space Amateurs Clubs will offer open memberships to all people from the community. “Watching the sky as a hobby is not common in Sudan. It is my goal to build a community of a thousand sky gazers,” states Yasir, who was recently appointed as National Coordinator of UNAWE Sudan.

Carmen works with UNAWE Romania, where she is working on promoting astronomy through various projects. Using the telescope, she will organise themed tours, night observations in rural areas and cross-curricular projects. It would also feature at an interactive astronomy workshop for pupils (28 girls) in our school's pedagogical classes, “so that they would take into account a profession that targets cosmic space, but also for them to cultivate the taste for astronomy for future students.”

The Romanian primary education does not have a discipline to study astronomy, so one of the final products of this project, in collaboration with a school in Portugal, will be the development of a new, innovative astronomy curriculum. It will make the exploration of the Universe accessible and fun, so that the girls would see the profession of astronaut or another STEM profession as a potential one. “This will inspire the girls to believe in themselves and their ability to contribute to an area where women are underrepresented.”

“First, I will build a solar filter for the telescope using the PVC fitting cap, and add the ND5 filter on it. Then it’s possible to hold observation sessions during day and night with the students at Sekolah Alam Minangkabau and the Diniyah Putri girls school in collaboration with my colleague, Mr. Riki.”

The Diniyah Putri girls school was founded by Indonesian National Hero, Rahmah El Yunusiyah in 1923 and with the purpose of preparing women to become leaders in their community, not only proficient in their family.

In addition, regular observations will be held at a rooftop in Padang to capture astrophotography images with the Bresser telescope. The National Coordinator of UNAWE Indonesia will send these photographs to local newspapers, to introduce astronomy to the community using real images of celestial objects.

Last but not least, the telescope will travel to several remote areas in the eastern part of Indonesia, especially to islands in Maluku. Since 2016, the Heka Leka Foundation in Maluku has been inviting Aldino to hold water rocket workshops for students. “With the telescope, I can add even more to these sessions, which will be awesome for the children.”

“We plan to use these students to reach the good number of female students who are away from the limelight of the city and urban areas in Nepal. As the students who are compelled to stay in the villages are generally from marginalized community that includes poor economic background, lower castes who are expelled from society, the need of special outreach is a must,” says Manisha Dwa, National Coordinator of UNAWE Nepal.

After a short documentary and presentation, the telescope will be used to show celestial objects to people in local areas. Those in Kathmandu valley can visit the NASO office, whereas for those in suburbs and villages; volunteer state representatives shall be visiting schools and colleges with the telescope to host outreach activities locally. 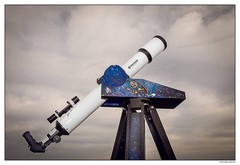