Home > About > Too Young to Learn?

With its combination of social, educational and scientific goals, UNAWE is a unique programme.

Professor George Miley from Leiden University, the Netherlands, and Founder of UNAWE

Too Young to Learn?

The educational programme Universe Awareness is aimed at children as young as four years old. But can we expect infants to grasp astronomical topics in a way that will have a meaningful impact on their development? To investigate this important issue, here we present an overview of research into children’s cognitive development.

Like any devoted parent, Professor George Miley, from Leiden University, took a keen interest in his children’s education and volunteered to give talks about astronomy in their primary school. “It was marvellous to see how very young kids became excited when I showed them Hubble pictures and told them about the strange objects in our Universe,” says Miley. In part inspired by his own experiences of introducing astronomy to young children, Miley founded the astronomy education programme Universe Awareness (UNAWE) in 2006. It has a target audience of 4-10 year old children, particularly those from disadvantaged backgrounds. But was he right to focus UNAWE’s efforts solely on young children?

To answer these questions, we first need to understand the way in which children acquire scientific knowledge. Some development psychologists have hypothesised that young children form naïve theories about the Earth based on what they witness: The world around them appears flat and objects need a surface to stand on, therefore the Earth is flat and supported [1,2]. Proponents of this hypothesis, such as Stella Vosniadou and William Brewer, say that counter-intuitive scientific theories are difficult for young children to accept and that the role of educators is to challenge these naïve theories. They argue that scientific explanations about how the Universe works can only be introduced at a later stage of a child’s education (around 10 years old), once they become aware that their naïve theories are wrong.

However, there is a growing body of work that disputes this hypothesis, claiming that children are “theory neutral”. In these studies, development psychologists argue that children build-up a picture of the Earth in a fragmented fashion and there are no strong intuitions and misconceptions to overcome [3,4,5]. Therefore, children can gradually learn and accept scientific explanations of the world around them from a young age.

One of the proponents of the fragmented model, Dr Georgia Panagiotaki, a lecturer in Developmental Psychology at the University of East Anglia in the UK, says that children as young as four years old are able to understand basic scientific ideas. “Even though children are often not able to explain their ideas in great detail, scientific information and facts can be present from early on,” Panagiotaki told UNAWE. “And children benefit enormously for appropriate instruction and educational activities aimed at teaching them basic facts.”

Panagiotaki’s conclusions are supported by research [6] conducted at the University of California, Berkeley. Professor of psychology Alison Gopnik found that young children actually think in the way scientists do, testing hypotheses against data and making causal inferences. They learn from statistics and informal experimentation, and from watching and listening to others, according to her publication in Science. This supports UNAWE’s view that an early age is a perfect time for children to get in touch with science for the first time. Additionally, Gopnik’s research shows that encouraging play and letting children search for explanations themselves, rather than solely explain things, incites scientific thinking. UNAWE’s efforts to develop educational activities, in which children learn about the universe by means of exercises, are backed up by these findings.

An equal start in life

While the debate on this topic continues, away from the scientific arena, many charitable organisations have highlighted the importance of educating young children from disadvantaged backgrounds. UNICEF’s Programming Experiences in Early Child Development 2006 report, for example, states that educating disadvantaged children in their earliest years offers the best opportunity to give them an equal start in life. “[This is] when children’s brains are developing most rapidly, and the basis for their cognitive, social and emotional development is being formed,” the report states.

However, early childhood care and education is often the responsibility of parents, and many families in underprivileged environment are not in a position to offer as much to their children as wealthier parents. “I regarded disadvantaged kids as the most important group for UNAWE to target, because they are least likely to be exposed to the excitement of astronomy,” says Miley.

The High/Scope Perry Preschool Program (HSPP) is a much-cited example for what investing in the education of young, disadvantaged children can achieve in the long-term. Beginning in the 1960’s, HSPP randomly divided 123 disadvantaged African-American children aged between 3 to 4 years old into a group that received a pre-school programme and a control group that received no intervention. HSPP maintained contact with the study’s participants every year until the age of 11, and then conducted follow-up interviews at ages 14, 15, 19, 27 and 40.

In 2005, a study of 97% of the participants (then aged 40) revealed that those who had taken part in the pre-school programme achieved greater success in life than the control group, such as higher rates of graduation, better paid jobs and fewer criminal records [7]. “This report substantially bolsters the case for early interventions in disadvantaged populations,” economist James Heckman, from the University of Chicago, said in a HSPP press release.

Yet, despite the greater successes in later life of the children in the HSPP pre-school group, these children didn’t achieve higher IQ scores than the control group when they were tested at the age of 10. Those in the pre-school group, however, did achieve bigger successes in life, because they had improved noncognitive abilities, such as motivation and perseverance [8].

A further conclusion of the study was  that the programme had also been an economic investment for society [11]. In constant 2000 US dollars, $15,166 had been spent on each participant in the pre-school programme, but the economic return to the general public was calculated to be an astounding $195,621 per individual – that’s a $12.90 return per dollar invested. The vast majority of this pot of money (88%) was calculated to be the amount saved from a reduction in crime levels in the pre-school group.

According to Heckman, who has reviewed a large body of research into economics and development psychology, the rate of return would have been lower if the investment in education was instead made when the disadvantaged children were older. (Figure 1  [12] plots Heckman’s relationship between age of intervention and the benefit-to-cost ratio of an educational programme.) Heckman’s work shows that investing in education in a child’s earliest years is not only worthwhile, but also the best time to intervene. 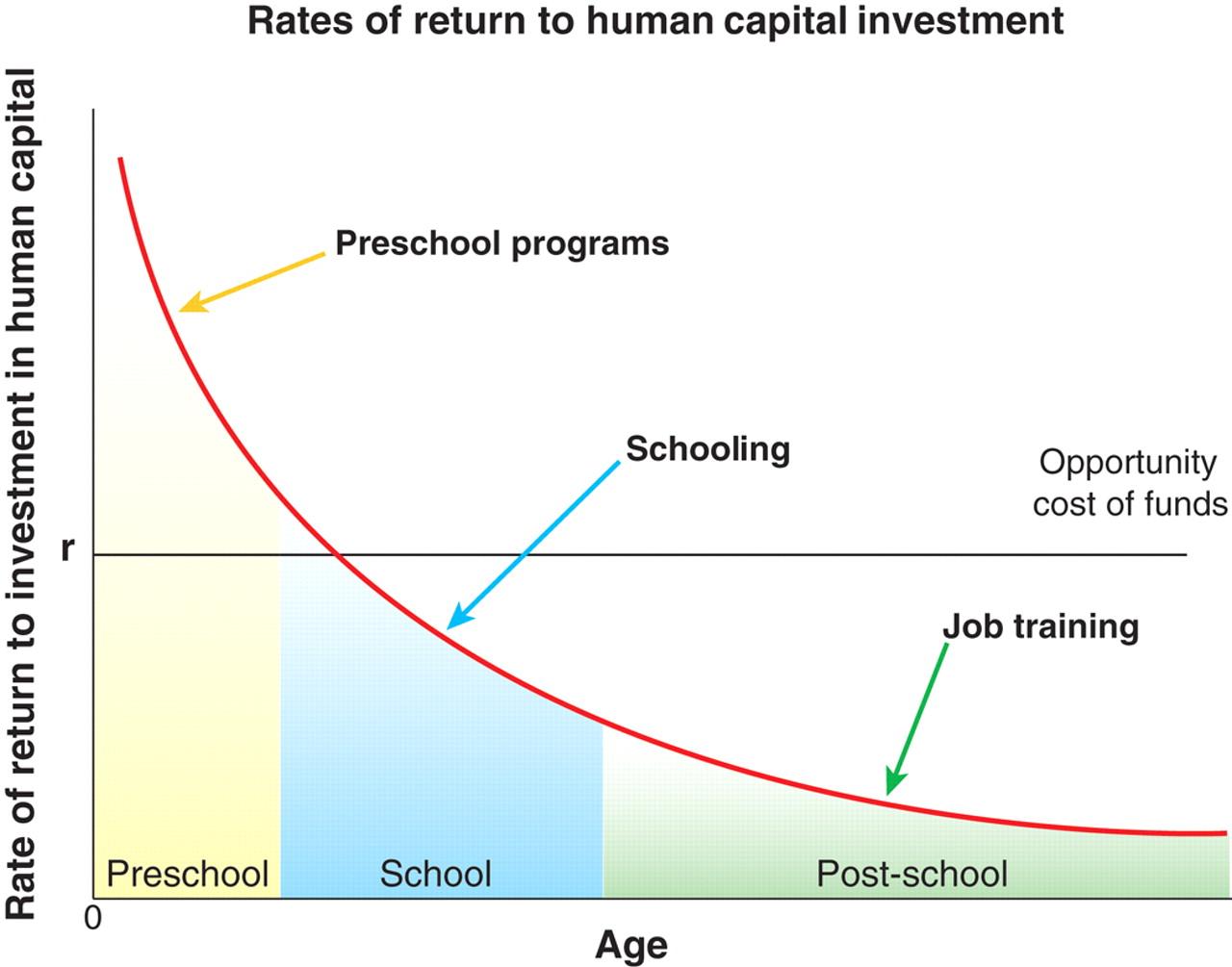 However, while investing in educating young children is important, programmes like UNAWE need to be backed up with continued interventions at secondary school age, says Professor Susan Gelman, who researches child cognitive development at the University of Michigan. “Although I strongly endorse investing in primary education, I also believe in continued interventions, into and including secondary school,” Gelman told UNAWE. “Education is not a single experience but rather a continuing process.”

Education for young children comes at a crucial age, like the HSPP shows. Neuroscientist Martha Farah of the University of Pennsylvania reaches the same conclusion by looking at the development of children’s brains. In her research [9], she shows that the 4-year old brain is extremely vulnerable to its environment. If children of this age grow up in an educational environment, including books and educational toys, their brain is affected in a significantly positive way. The researchers conclude that the thickness of two regions in the cortex is enhanced by such stimulating surroundings. At age 8, the impact on the brain is already much smaller. This shows that young kids in developing countries, living in less supportive environments, greatly benefit from UNAWE’s programme. They learn about the universe, but the side effect is in this case perhaps even more important: by getting in touch with educational material, they develop their brains.

Besides providing an environment for underprivileged children to develop their brains, UNAWE’s program allows children from all societies to increase their creative thinking abilities by learning about the universe. Research from Nira Liberman [10], professor in social psychology at Tel Aviv University, shows that learning about distant objects promotes more abstract thought. When visualizing proximal objects, individuals tend to use concrete and detailed images, while picturing an object in a more abstract, decontextualized way when thinking about distal objects – either temporally distant (in the far future), hypothetically distant (unlikely), or spatially distant (actually far away). In astronomy, one often deals with these kinds of distal objects, especially the latter. Liberman found that after priming of spatial distance – compared with priming of spatial proximity - children are more creative in both fluency and originality. With her findings, she confirms previous theories, which state that psychological distance promotes abstract thought, which, in turn, promotes creativity.

UNAWE is a global programme that is active in 46 countries worldwide, so it is also important to note the impact that local cultures play in educating young children. In a background paper for the UNESCO Education For All Global Monitoring Report 2007, Arnold et al. claim that education programmes that aren’t responsive to local cultures will suffer from lower levels of enrolment and retention [13]. The researchers argue that education programmes that are at odds with local cultures can be viewed by parents as having a damaging effect on the welfare of their children. UNAWE recognises the importance of considering local cultures and uses local experts to take charge of implementing its activities in each partner country, who understand the local cultural needs and histories.

Furthermore, astronomy has played an integral part in local cultures throughout history. Indeed, some of the misconceptions that children have about astronomy come from local cultural beliefs. For example, a recent study found that a large proportion of young Indian children think the Earth floats on water, which stems from indigenous Indian astronomy [14]. Therefore, knowledge about local cultures can also bring new insights into how children view the Universe.

There’s no denying that educating young children about astronomy is challenging – especially in a global project that needs to consider many different local cultures. However, much of the current literature into children’s cognitive development indicates that a project like UNAWE will be greatly beneficial to the youngsters that it reaches. Time and time again, a child’s early years are shown to be the most crucial in determining their future prospects.

It will take many years before we can formally evaluate the impact of UNAWE. But in the meantime, it’s important to remember why Miley founded UNAWE in the first place: he was inspired by the smiling faces of children, who sat captivated as they listened to him tell stories about our Universe.

[1] Vosniadou, 1994, Capturing and Modelling the Process of Conceptual Change

[3] Nobes et al, 2003, Children’s understanding of the earth in a multicultural community: mental models or fragments of knowledge?

[5] Panagiotaki, Nobes, & Patton, 2008, Mental models and other misconceptions in children’s understanding of the earth