Learning about Asteroids through Art

In this short activity, participants learn about the characteristics and location of asteroids and build their own model asteroid using clay. 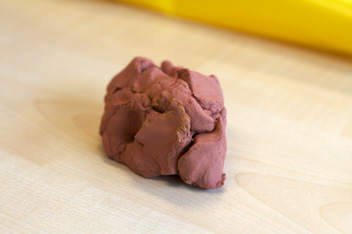 Learn about the characteristics and location of asteroids, and how planets and asteroids form.

What is an asteroid?

Asteroids are boulders orbiting the Sun, with sizes ranging between some hundred metres and several kilometres. An asteroid is called a meteorite if it hits the Earth. If it completely evaporates in the Earth’s atmosphere before crashing on the surface, it’s called a meteor. People usually refer to meteors as ‘shooting stars’. Most meteorites are predominantly composed of silicates or a mixture of iron and nickel. In the past, some huge meteorites have struck the Earth. Sixty-five million years ago, almost 90% of animal species were eradicated (among them the dinosaurs) when a meteorite hit Yucatan, Mexico. Luckily, this happens very rarely! We owe this to Jupiter, which attracts many asteroids with its gravitational pull.

Where are asteroids located?

Many asteroids form large rings or belts around the Sun. There are two asteroid belts in our Solar System: the main belt (or simply called asteroid belt) between Mars and Jupiter, with thousands of asteroids (see picture below), and the Kuiper belt, named after its discoverer, a disk-shaped region that extends outside of Neptune’s orbit and contains countless asteroids and many dwarf planets, of which Pluto is the most famous. Most asteroids are found in the Asteroid Belt; however, there are asteroids that are not in that orbit and are called Near Earth Objects (NEO). Sometimes these NEOs can reach our planet Earth.

Why are asteroids important?

Asteroids are part of a group known as minor bodies. Asteroids, comets and meteoroids can provide valuable information on the evolution of our Solar System

Additionally, there are small bodies called meteoroids, remnants of the formation of the Solar System. These meteoroids can be as small as a grain of rice. Meteoroids constantly meet Earth, producing what we see on Earth as "shooting stars".

Is it true that an asteroid can hit Earth?

An asteroid 10 kilometres in diameter hit the Earth 65 million years ago. This asteroid impact on the Earth is assumed to be one of the reasons why the dinosaurs went extinct.

Discuss asteroids with the group. Ask: Who knows what an asteroid is?
Start a discussion and lead the conversation to explaining the questions in the background information.

Ask the children to take a piece of clay the size of their fist. Let them divide it into small pieces and place these fragments on a table. Take the larger piece and start attaching the smaller pieces slowly one by one. Attach all the pieces carefully so as to not knead the formed shape, and continue until all the small clay pieces are used. Let them hit the clay chunk with the knuckle of a finger a few times.

After washing their hands, they can take a brush and paint asteroid in favourite colour. Leave the asteroid to dry for a day. Now you have your own asteroid!

In this activity, the children have learned about asteroids through discussion and by moulding their own asteroids using clay.

Grouping small fragments of clay recreates the role of gravity in solar system formation. The small fragments represent the planetesimals, or small dust particles, in the formation of objects in our solar system. Some of these particles have accumulated to become asteroids, while others have not.

You can also tell the children about comets. Comets are like dirty snowballs or icy lumps of mud. They consist of a mixture of ice (from water as well as from frozen gases) and dust. Like asteroids, comets revolve around the Sun. However, their orbits are strongly elongated compared to planets, meaning they occasionally get very close to the Sun, and at times they get very far away. When they cross a planet’s orbit, they could collide with it. This happened, for example, in 1994, when the comet Shoemaker-Levy collided with planet Jupiter and broke into pieces. When comets come close to the Sun in their orbit, the ice in their core melts and evaporates. This causes a beautiful tail, which can be clearly seen in the night sky if the comet passes by the Earth closely enough.

In 2061, Halley’s Comet will once again come close to the Earth. It orbits our Sun once every 76 years. Remember to mark its arrival on your calendar!

At the end of the session, when all the asteroids have been put to dry, revisit the questions and topics discussed in the introduction. Specifically, ask the children:

Possible answers to these questions are described in the background information.