Creating Eclipses in the Classroom

During an eclipse, the Sun or the Moon seems to disappear, these are called solar or lunar eclipses, respectively. These astronomical phenomena have been shrouded in myth and legend throughout history. How do they happen?

In this activity, explore these fascinating natural phenomena with an easy-to-build model and learn about the movement of the Sun, the Earth and the Moon.

For each model, you will need:

Lunar Eclipses: Although the Moon often shines brightly in the night sky, it isn't actually emitting its own light, it simply reflects light from the Sun. The shape of the Moon that you see depends on both where you are on Earth and at which point the Moon is in its 28-day (one month) cycle around Earth.

Every month the Moon completes a cycle, starting as a complete circle (the full moon), gradually shrinking night-by-night until it has become invisible (the new moon), then swelling to a full circle again. These stages are called the 'phases of the Moon' (see Image 1).

When the Moon is on the far side of the Earth from the Sun, the three bodies do not lie in a straight line; instead, the Moon is located slightly above the Earth and so it can still be illuminated by the Sun, so we see a full moon.

However, on average 1.5 times a year, the Earth passes directly between the Sun and the Moon, and the Moon is completely hidden in the Earth’s shadow – we call this a 'lunar eclipse. As the Moon enters the Earth’s shadow (called the 'umbra') and travels through it, it takes on a beautiful dim red glow. As the Moon crosses in or out of the umbra, observers can see the curve of Earth partially shadowing the Moon. This partial shadow is called the penumbra. (see Image 2)

Solar Eclipses: Unlike lunar eclipses, solar eclipses are very rare, occurring on average just once every two years across the entire globe. Most people will never see one because solar eclipses are only visible from relatively small areas of Earth at any one time. Solar and lunar eclipses have somewhat different causes; during a solar eclipse, we are in shadow — the Moon passes exactly in front of the Sun and casts a shadow on Earth. The Moon is much smaller than the Sun, meaning this shadow will only be seen from a small area of the Earth.

To understand this, hold your thumb in front of the Sun so that it is completely covered. Your eyes are in the shadow of your thumb, but it does not affect the person standing next to you, as they are not in the same shadow. The Sun looks normal to them.

Once the Moon moves directly between the Earth and the Sun, it appears as a black disk in the sky surrounded by a 'crown of fire'. That fire is actually the Sun behind the Moon. Once the Moon passes by, the full, burning light of the Sun returns (see Images 3–5).

Divide the class into groups of three or four. Give each group the materials to make their own model of the Sun-Moon-Earth system.

Take one cardboard tube and make a series of small (2-cm deep), even, vertical cuts around the circumference of each end.

Bend the cut pieces out at each end and then stand the tube upright. The cut edges should fan out like a flower (Image 6). 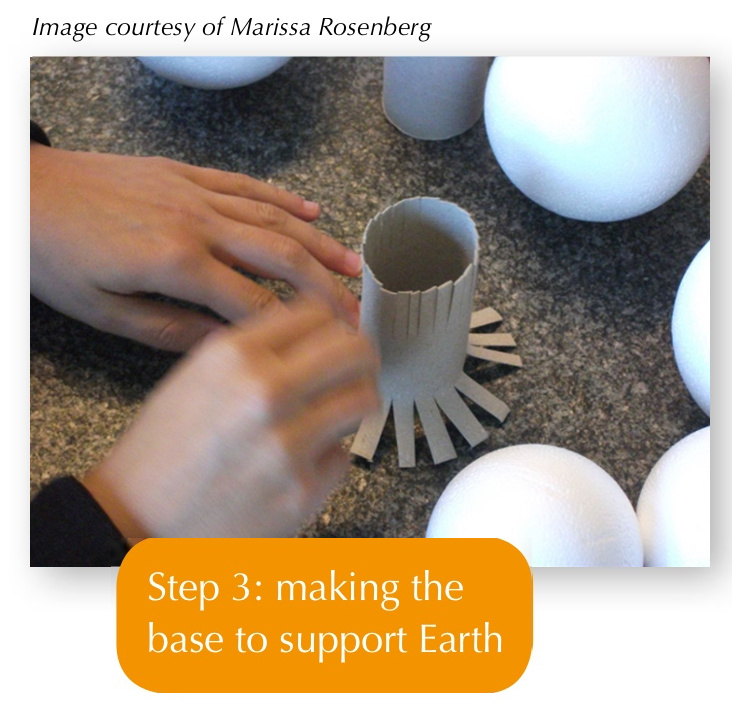 Using tape or glue, attach the larger ball to the top of the tube. This ball represents the Earth (Image 7). 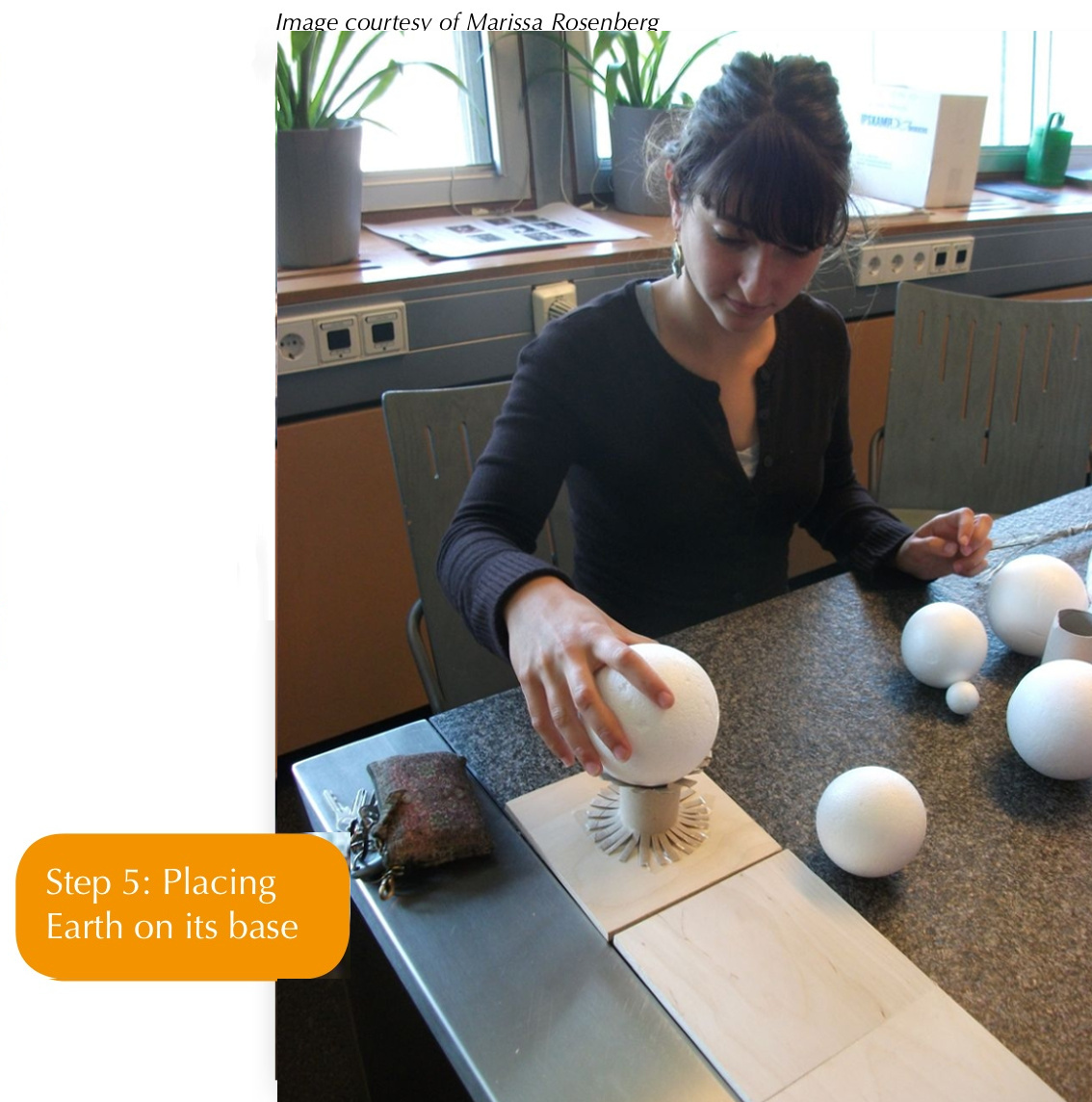 Cover the smaller ball with aluminium foil, with the shiny side on the outside. This will be the Moon.

Insert one end of the wire into the top of Earth so that the wire is vertical.

Measure approximately a finger’s length along the wire and bend the wire here at a right angle, creating a horizontal arm.

About halfway between the Earth and the far end of the cardboard strip, measure a finger’s length along the wire and bend it again. This time bend it downwards at a right angle, towards the cardboard base.

Insert the other end of the wire into the "Moon". The Moon’s equator should be at the same height as the Earth’s equator (Image 8). 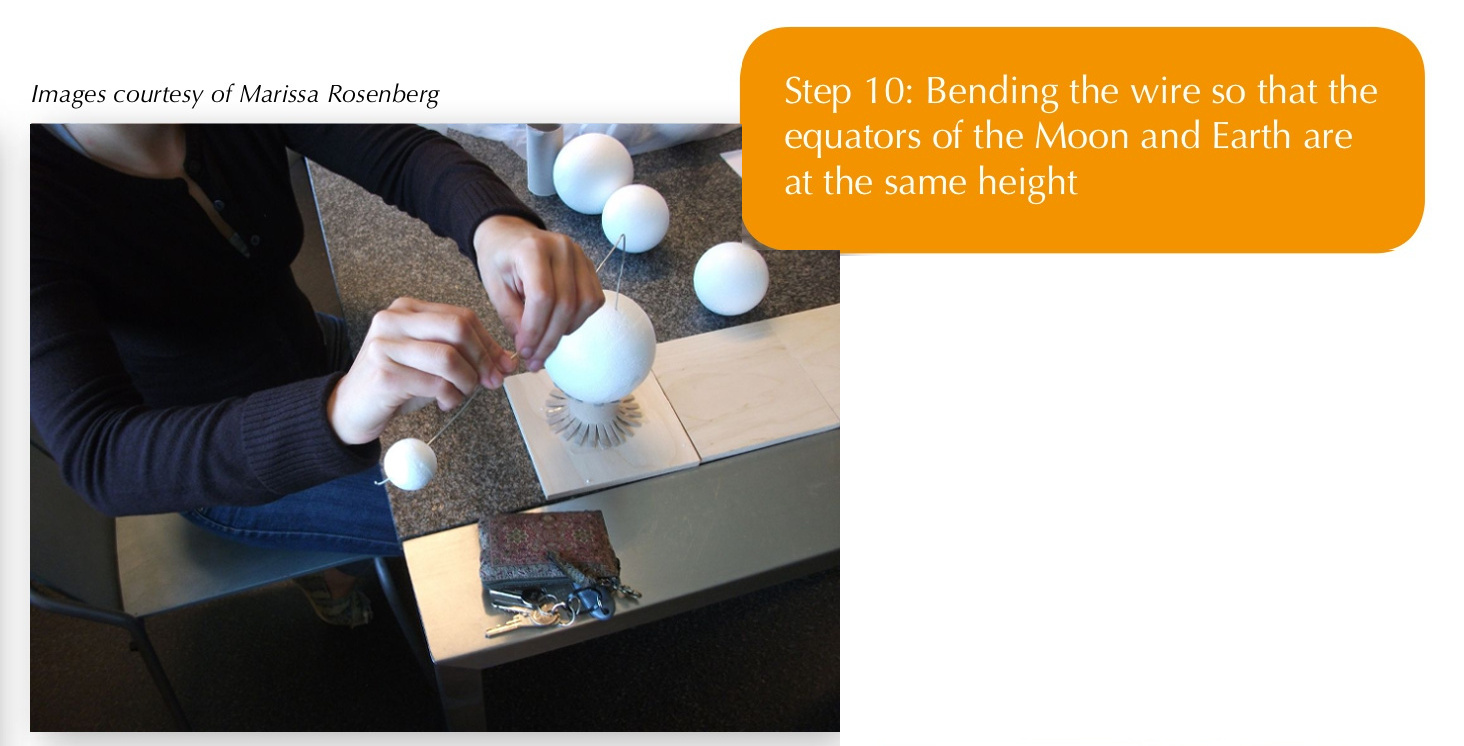 Balance the torch on a stack of books or magazines at the opposite end of the cardboard strip from the “Earth”. Make sure the height is correct: the middle of the torch beam should hit Earth’s equator.

If the beam is too diffuse, attach the second cardboard tube to the end of the torch to direct the light. Ensure that the beam directly hits the nearest half of the Earth and the Moon. If the beam is not bright enough, move the stack of books closer (Image 9). 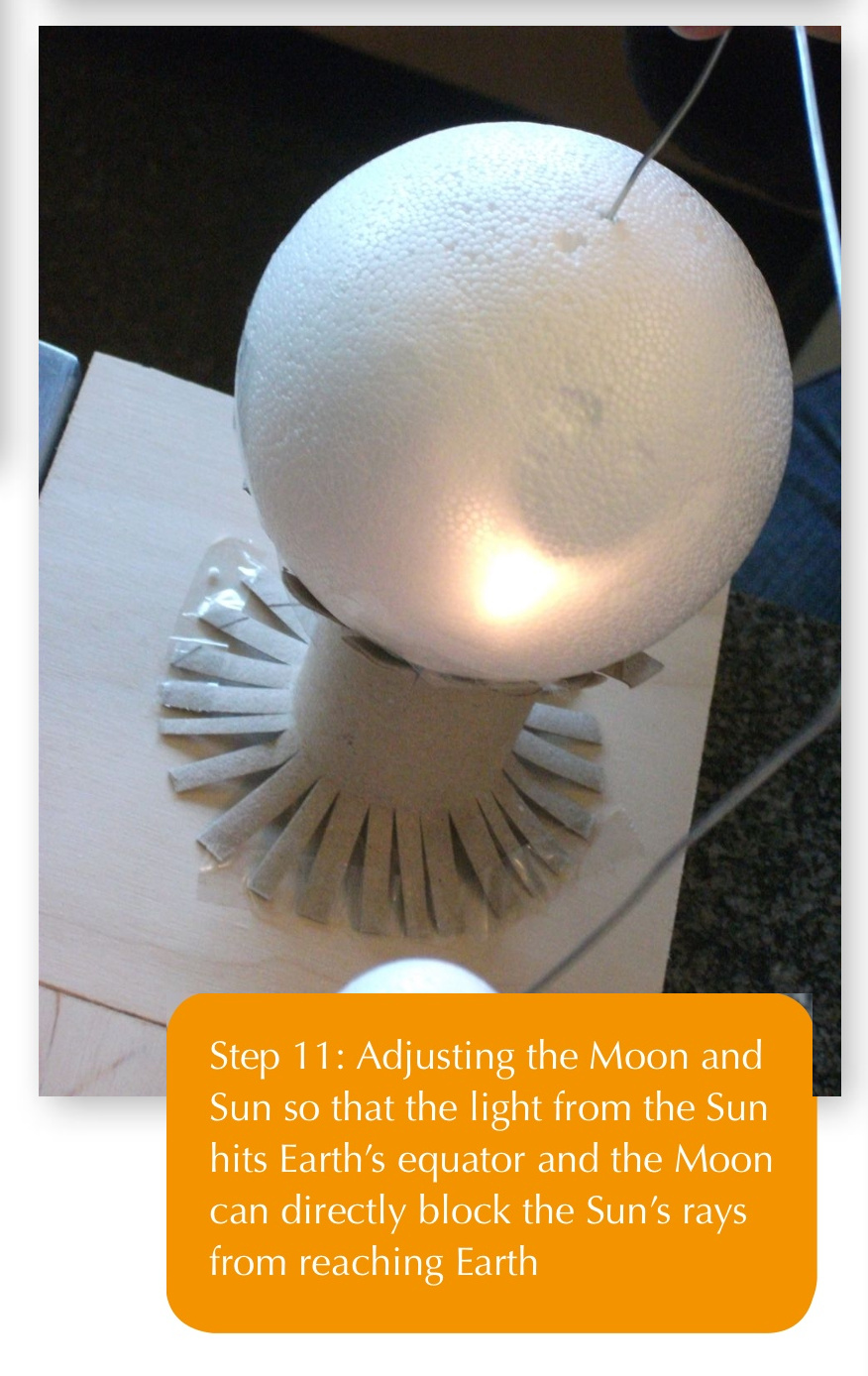 Now students will use their models.

Begin by asking your students if they have ever seen an eclipse. Was it a solar or a lunar eclipse? Explain that solar eclipses are much less common than lunar eclipses, but today they will be lucky enough to see both!

Create a solar eclipse: Stand facing the torch and swing the wire around until the Moon casts a shadow on the Earth; if necessary, dim the lights in the room. The Moon is now positioned between the Earth and the Sun and is blocking the “sunshine” for some people on Earth. Point out that only people directly in the shadow will see a complete eclipse of the Sun. You can show how the shadow moves by slowly rotating the wire (Image 10). 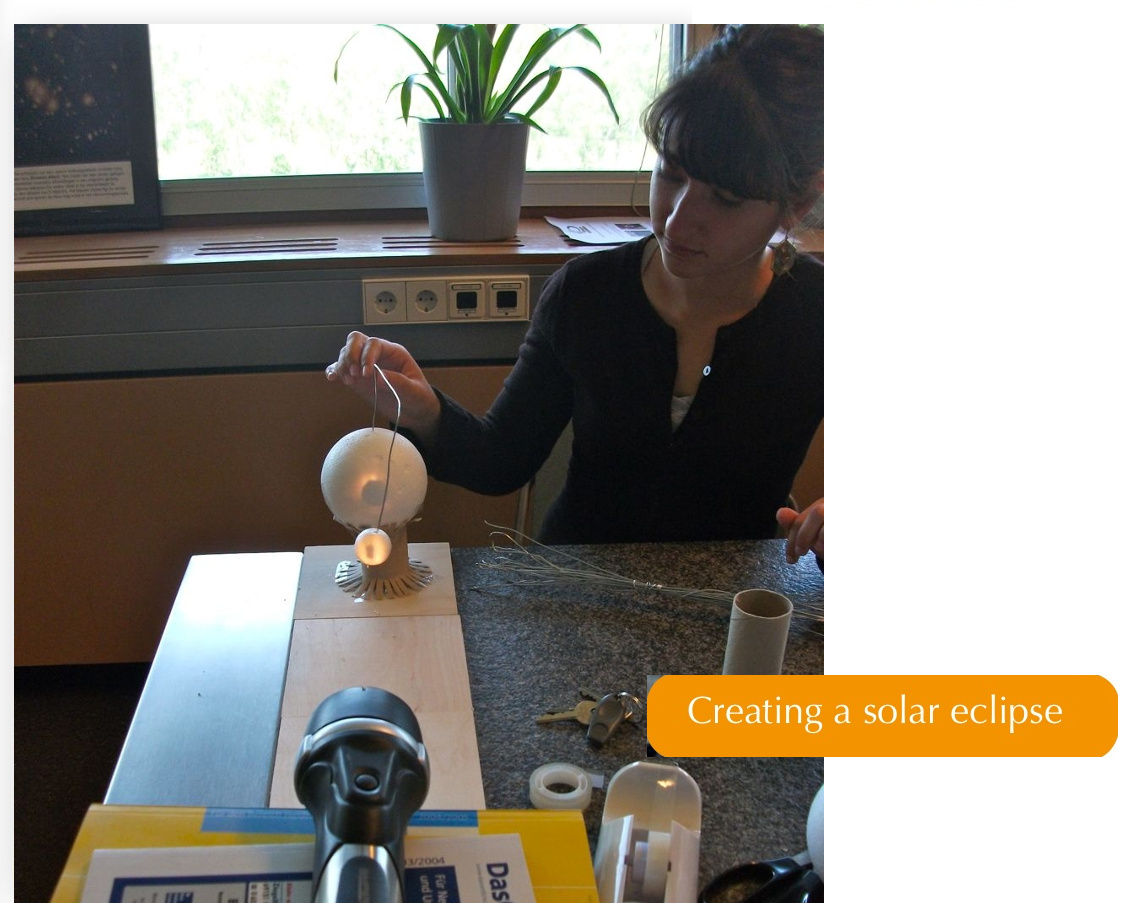 Now create a lunar eclipse: Stand facing the torch and swing the wire so that the Moon is behind the Earth. No light should be hitting the Moon: the Earth is between the Sun and the Moon, casting a shadow over the entire Moon. Explain that unlike during the solar eclipse, the entire "night" side of Earth can see the lunar eclipse (Image 11). 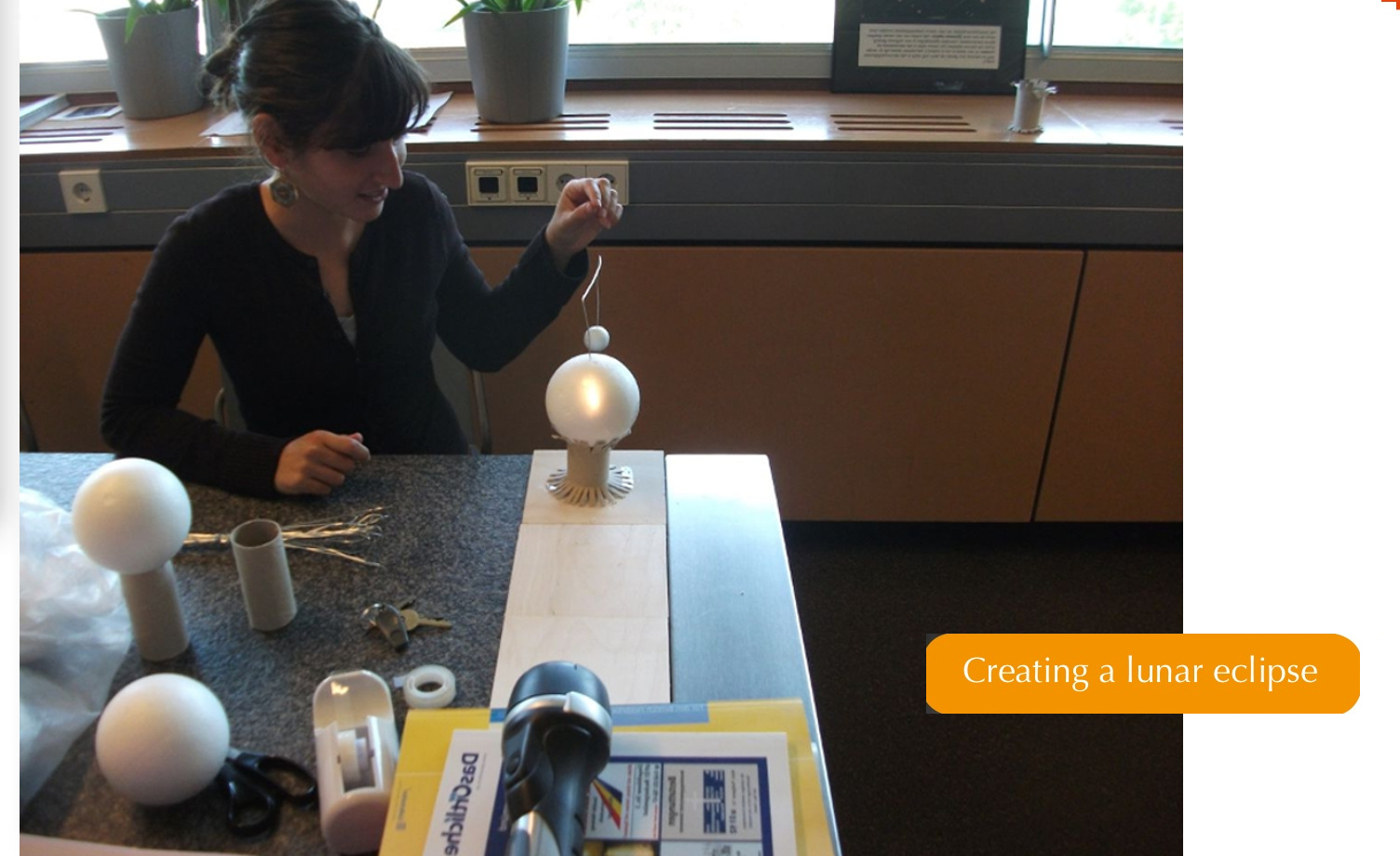 For a video explanation of why the Moon looks red during a lunar eclipse, see:

For a comparison of lunar and solar eclipses, see:

During a lunar eclipse:

During a solar eclipse: