Model of a Black Hole

Many children may have heard of black holes and already have the understanding that they are “bottomless wells". If something falls into a black hole, it is impossible for it to escape — even light cannot escape and is swallowed. The lack of light is how black holes get their name. These objects are mysterious and interesting, but they are not easy to explain. This activity will allow children to visualize, and therefore help them decompose, the concepts of space-time and gravity, which are integral to understanding these appealing objects.

Gravity is a force of attraction between two objects. All objects with mass (weight) have gravity. Gravity acts like a magnet - pulling objects together. What causes gravity is not really known. The Earth has gravity, this is what holds everything close to the planet, even though it's round. Trees, water, animals, buildings, and the air we breathe are all held here by gravity. All of the planets, the stars and the moons of the Universe also have gravity. Even our own bodies have gravity. The Earth's gravity is far stronger than our own so we don't notice the gravity our bodies possess.

Gravity is affected by the size and proximity (closeness) of objects. The Earth and the moon have a stronger pull on each other than the Earth and Jupiter because the Earth and moon are closer to one another. Earth has a stronger pull than the moon because it is larger, so there is more pull on our bodies here on the Earth than astronauts who have gone to the moon would have while they are visiting there. That's why astronauts can jump higher on the moon than on Earth. We don't actually "feel" gravity. We only feel the effects of trying to overcome it by jumping, or when we fall. Actually, the man who thought of the “Universal Law of Gravitation” was inspired by an apple falling on his head as he sat thinking in the garden. The apple was being pulled to Earth by gravity!

A black hole is a region in space where gravity is so strong that nothing that enters it can escape, not even light! Black holes form when a massive star runs out of fuel and becomes unable to support its heavy outer layers of gas. If the star is large enough—approximately 25 solar masses—then gravity pulls on the gas and causes the star to grow smaller and smaller until its density reaches infinity at a single point. This is called a 'singularity'.

Astronomers usually observe objects in space by looking at the light. However, since black holes don’t emit any light, they can’t be observed in the usual way. Instead, astronomers have to observe the interaction between the black hole and other objects. For example, as black holes pull material in, like water being sucked down a plughole, the material forms a disc around the black hole. As the disc spins faster and faster, it heats up to extreme temperatures, causing enormous amounts of light and material to beemitted into space as dazzling jets. If they're pointed towards us, these jets are extremely bright and can easily be picked up by our telescopes on Earth. For black holes that are not “feeding”, one way to detect them is to observe the motions of stars around the black hole, since their orbits will be altered by its presence.

Space is made up of three dimensions (up-down, left-right and forward-backward), if you add the fourth dimension, time, then you have what's called the space-time continuum. This might sound strange, but imagine you are meeting somebody; you need to know which location (place in space) to meet them at, but you also need to know which time!

Albert Einstein was the first person to propose the idea of the 'fabric of space' (space-time), in his “General Theory of Relativity”. Before Einstein's theories, it was believed that gravity was a force, as explained by Isaac Newton. But, Einstein's general theory of relativity explains gravity as the “curvature of space-time”. This concept can be pictured by imagining space-time as a rubber sheet. The balls on the rubber sheet bend the sheet around them, similar to the way matter bends space-time.

In the following activity, students will build a model of a black hole, which is intended to help them visualize how exactly a black hole can “bend” space and time and affect nearby objects. The activity should take about one hour.

Before you begin the activity, use the “Background Information” section to introduce children to the concept of gravity. You can do this by telling the story of Isaac Newton and the apple tree, and having all the children jump up and feel gravity pull them back to Earth. 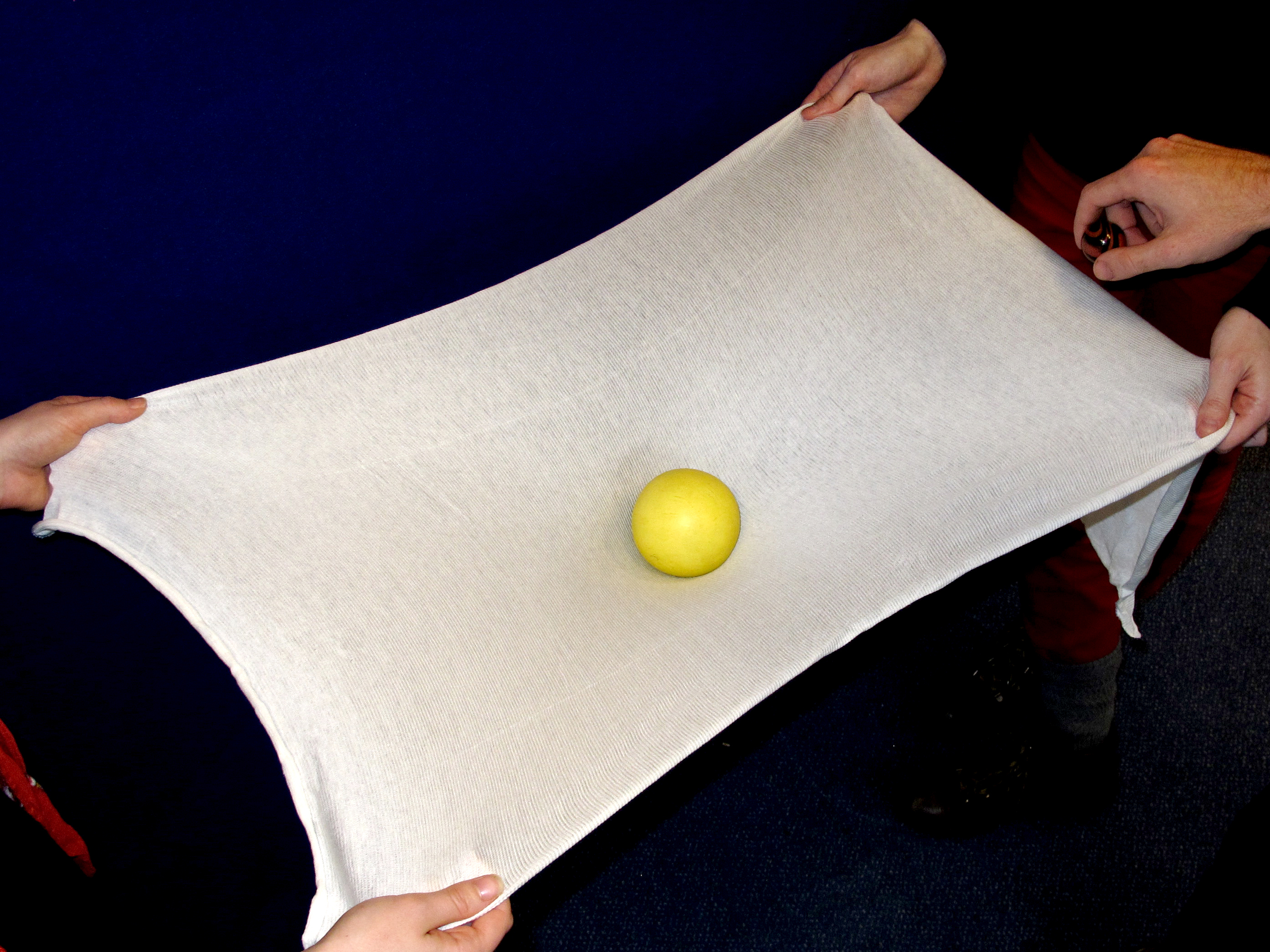 Ask several students to stretch the bandage horizontally until it becomes taut to represent two-dimensional ‘space’. Note that the students must hold the bandage still so that their movements do not affect the experiment.

Place the marble on the bandage and make it roll across its surface. The marble's path should follow a straight line, similar to that of a ray of light travelling through space.

Swap the marble for a heavy ball. When you place it on the bandage you will see how it deforms the fabric of ‘space’. ‘Space’ becomes curved around the heavy object. (Image 3) 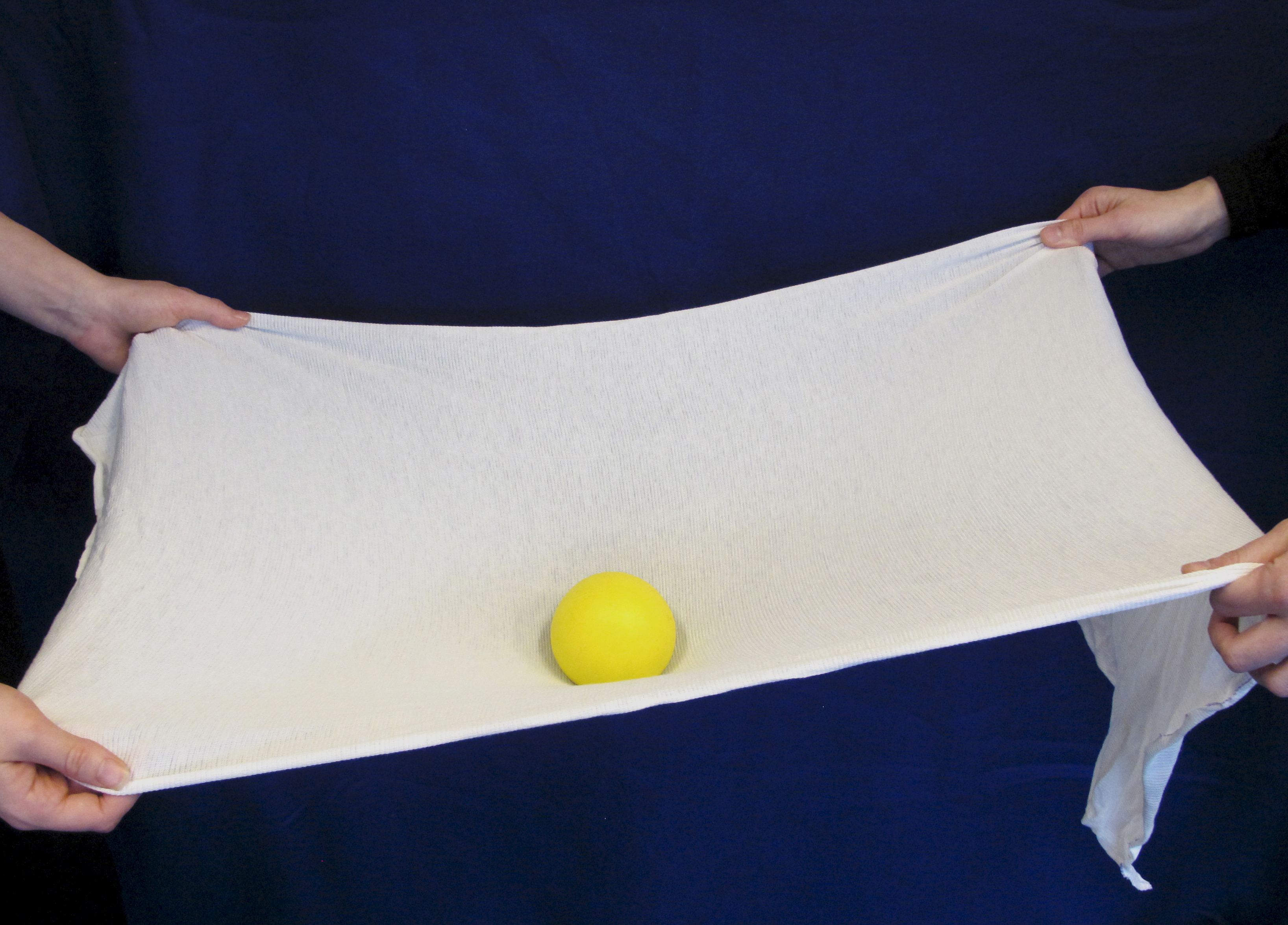 Make the same little marble roll close the heavy object. Its trajectory should now be altered by the deformation of the bandage. This is similar to what happens to light passing close to a massive object that deforms the space surrounding it. Try varying the speed of the marble to see how its path changes. (Image 4) 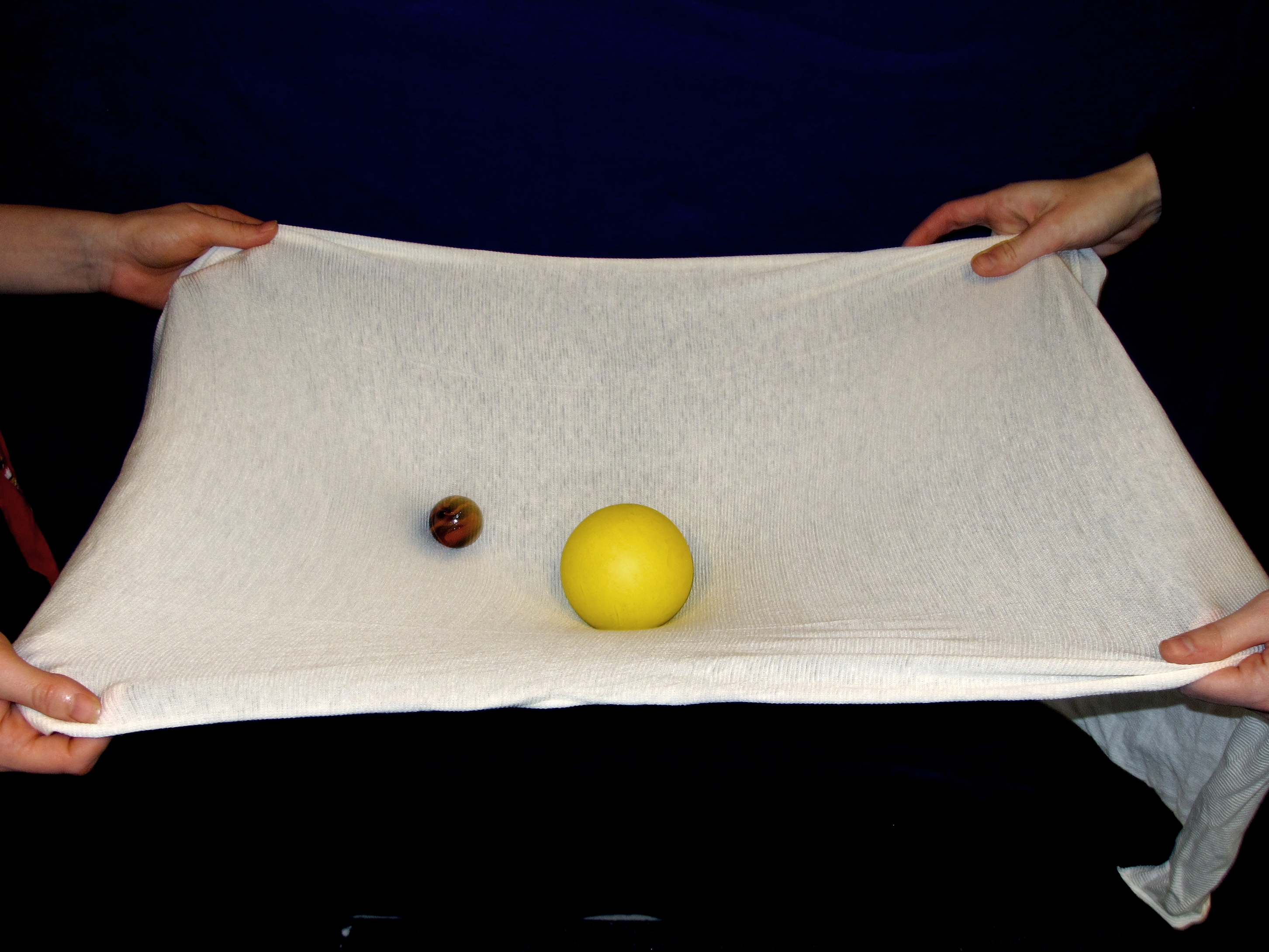 The more concentrated the central mass (i.e. the heavier the large ball), the more curved the bandage will be. This increases the depth of the ‘gravitational well’ from which the marble will not be able to escape. (Image 5) 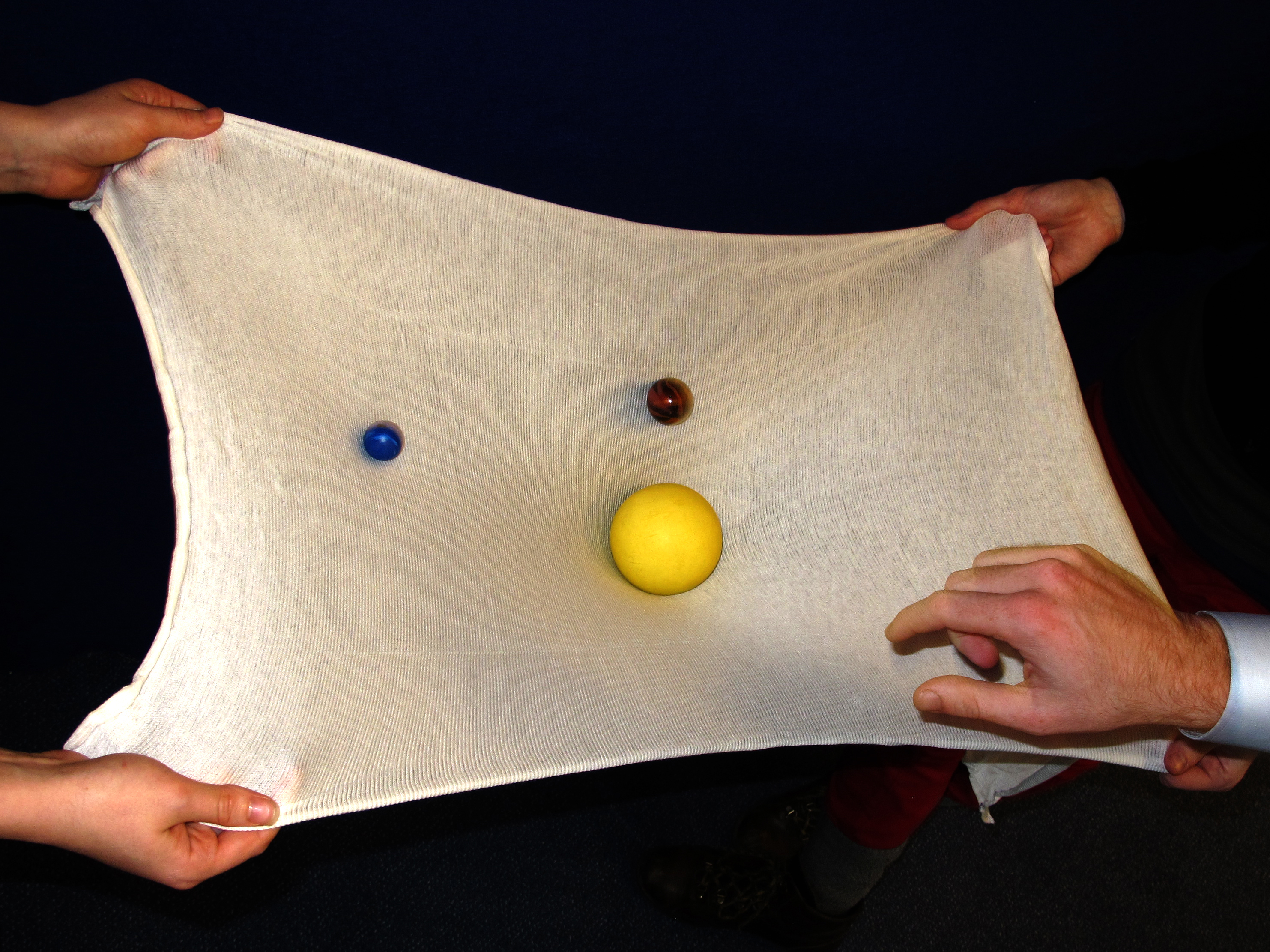 As the marble passes close to the large ball, it starts to revolve around the ‘black hole’ and eventually falls in. Once it is there, you can see how things may easily fall into a black hole but cannot come back out. This is what happens with black holes: their gravity deforms space in such a way that light or other objects fall in and cannot escape.

Accessible information about black holes from the ‘Ask an Astronomer’ site at Cornell University. It provides answers to many different questions and specifies difficulty level (beginner, intermediate, advanced):

A video by the European Southern Observatory showing real data taken of stars orbiting around a black hole:

A great interactive site from the Space Telescope Science Institute with extensive information about black holes as well as online activities and experiments: