In this activity students will build, and observe with, simple refractory telescope providing an interactive introduction to light, lenses and refraction.

Light is a specific type of energy that travels in straight lines and is made up of electromagnetic radiation. Unlike most other forms of energy, light can be detected by the human eye. Light can move very fast, at about 300,000 kilometres per second. Faster than anything else in the Universe. On Earth, the main source of light is the Sun. But light also comes from other sources, such as fires and light bulbs. Regardless of its source, light always travels in straight lines and always at the same speed in open spaces.

Visible light is just one type of electromagnetic radiation. There are various types, some with longer wavelengths than visible light and some with shorter.

Though natural light appears to be white in colour, there are actually several different colours that make up white light. The primary colours of light are red, green and blue, and each colour is composed of a different wavelength. Mixing the primary colours in different ways creates all other colours. When all of the colours are combined, the result is white light. Of the primary colours, red has the longest wavelength and blue, the shortest. Although, the shortest wavelength of all colours is violet. But most objects don't emit their own light, the colour that we see most objects as in our universe is actually composed of the colours of light that the object reflects. For example, an object that appears to be blue reflects blue light and absorbs all of the other colours. Likewise, an object that appears to be red to the human eye, such as an apple, reflects red light and absorbs all of the other colours.

Reflection occurs when light waves come into contact with an object that has a smooth, shiny surface and bounces off the object. For example, light reflects off of a mirror. Refraction, on the other hand, occurs when light passes through one transparent substance and into another, and bends. An example of refraction is the bending of light that occurs when it passes from air into water.

Sunlight often passes through drops of water in the atmosphere. When this occurs, the light may refract in the water, reflect off the inner surface of the water drop, and then refract as it moves back out into the air. When the first refraction occurs, the light is separated into the colours that compose it. During the second refraction, the separation is intensified. When this series of events is complete, a rainbow is the result.

Telescopes take us far beyond the Earth to the stars and planets of the night sky, microscopes allow us to peer into a tiny world our eyes alone could never see, film projectors make small images into enormous images on screens, and lighthouses cast reassuring beams of light far across the ocean. The amazing curves of glass or plastic called lenses make all these things possible! But how do they work?

A lens is a transparent piece of glass or plastic with at least one curved surface. A lens works by refraction: it bends light rays as they pass through it so they change direction. This means the rays seem to come from a point that's closer or further away from where they actually originate—and that's what makes objects seen through a lens seem either bigger or smaller than they really are.

There are two main types of lenses, known as convex and concave.

Telescopes were first created by the Dutch, a nation of sailors and sea explorers. They used it at sea to check the flags of approaching boats to identify whether they were friends or enemies. The great Italian scientist Galileo Galilei was the first person to use a telescope to observe the sky, and he quickly began making many important discoveries.

There are two types of telescopes: refractors and reflectors. The refractor telescope is a tube that contains two lenses: one at the front end with little magnification, which is called the ‘objective lens’, and another at the bottom end, that is closest to the user's eye, called the ‘eyepiece’.

The larger objective lens collects lots of light from an object far away and then refracts or ‘bends’ that light, bringing it to a point near the bottom end of the telescope. The smaller eyepiece lens then magnifies that point and brings it into focus at the user's eye. The tube itself holds the lenses at just the right distance from each other. It also keeps out light, dust and moisture that might interfere with the image.

It is very difficult to build big lenses since they weigh a lot and have to be supported around their edges, the thinnest, most fragile part. They are also difficult to move around (you want to be able to point your telescope at any point in the sky!). The light can also bend too much with a big lens, which distorts the image.

Remove one lens from the pair of glasses. (Image 1) 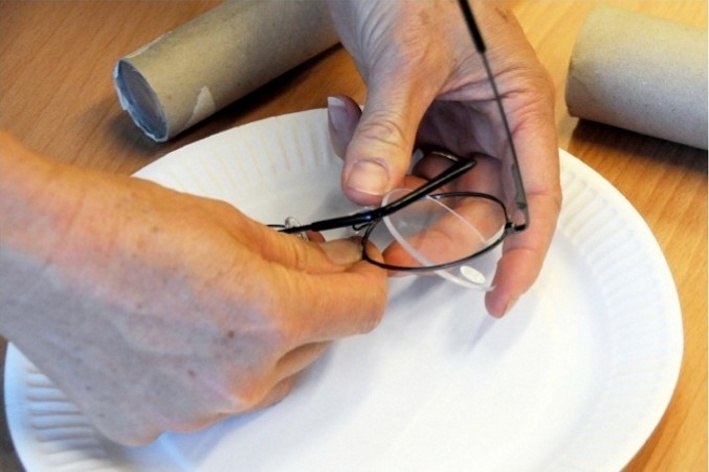 Take your magnifying glass or remove one of the bigger lenses from your binoculars. (Image 2) 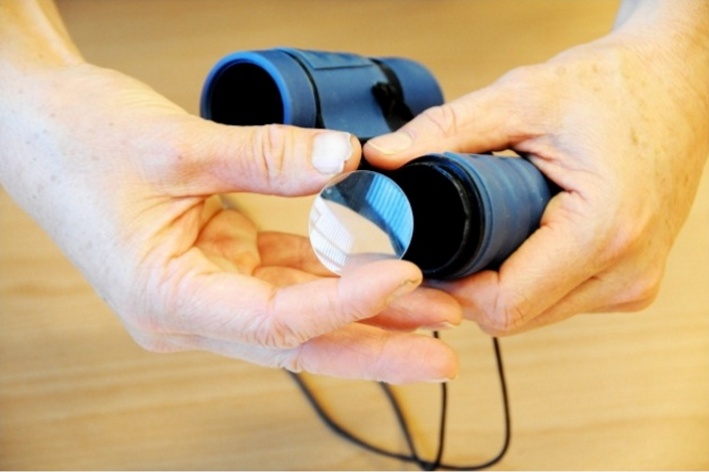 If you compare the two lenses, you will see that the magnifying glass or binocular lens is stronger than the glasses lens. (Image 3) 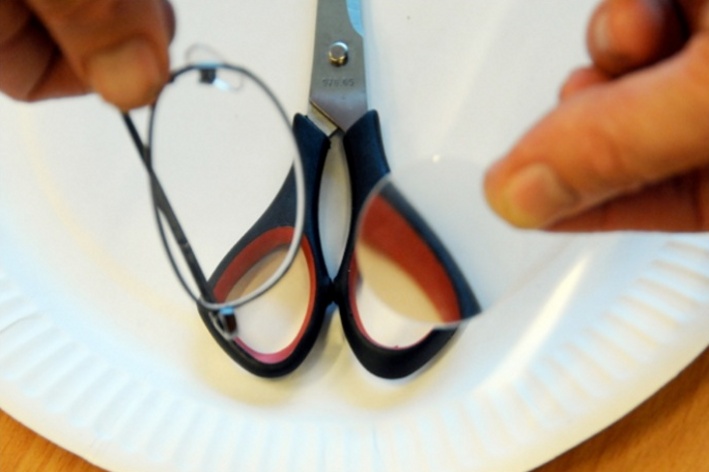 Cut along the entire length of one of the tubes. (Image 4) 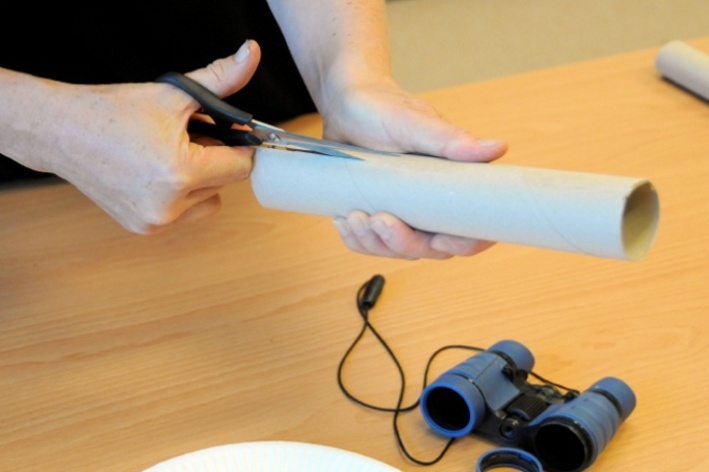 Hold the tube directly over the stronger lens. (Image 5) 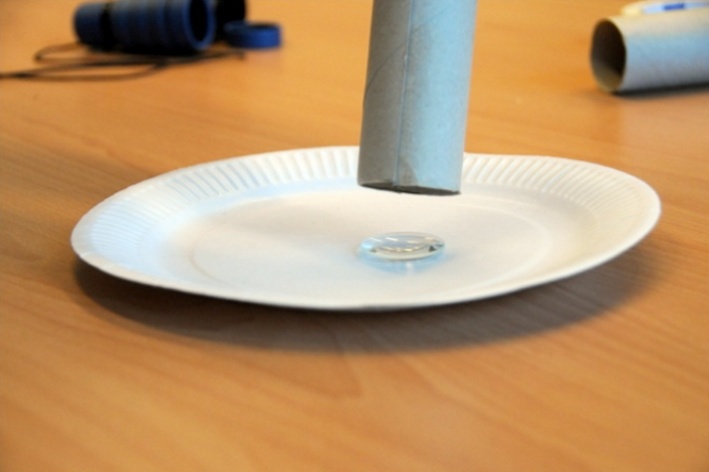 Grip the tube tightly to make it smaller in diameter (make the cut edges overlap) so that the lens is held securely in place. (Image 6) 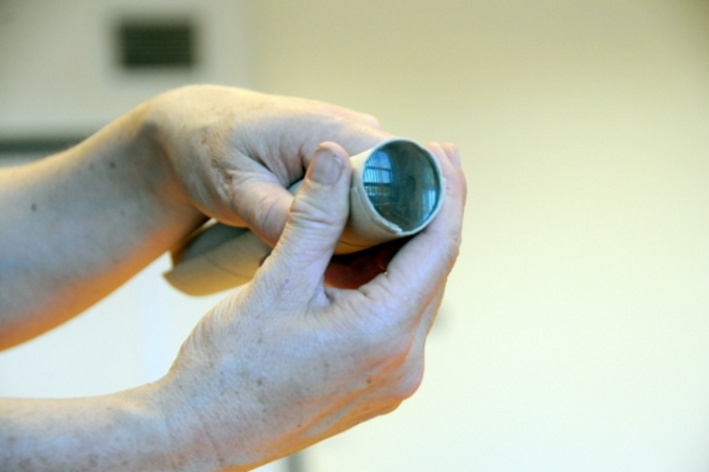 Attach the lens from the magnifying glass to the end of the tube. This will Tube #1, it be your ‘eyepiece’, the part that you will use to observe. (Image 7) 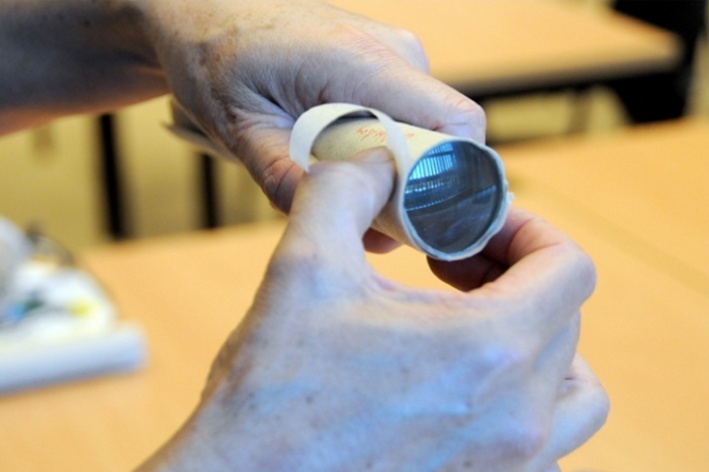 Put Tube #1 inside the other tube and check to see that it slides easily up and down. Once you are sure that the lens in Tube #1 is secure, and that the tube can move snugly inside the second tube (the tube that is not cut), tape along the entire cut border. This way, you will have a tube with variable longitude and you will be able to focus the image. (Images 8) 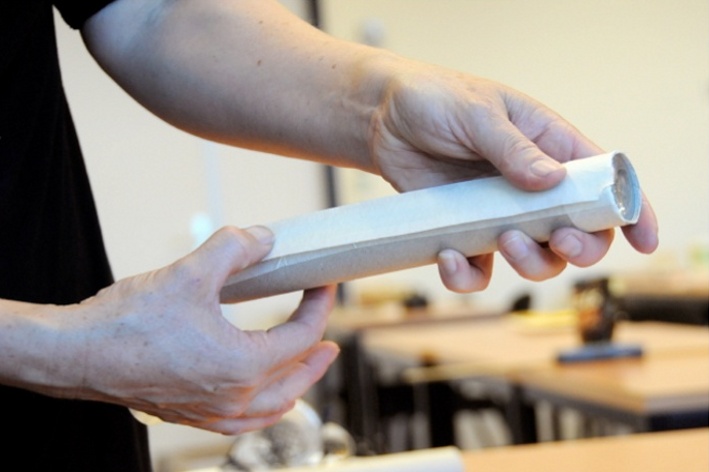 Take your glasses lens and attach it with adhesive tape to one end of Tube #2 (the tube that is not cut). This will be your ‘objective lens’. (Image 9) 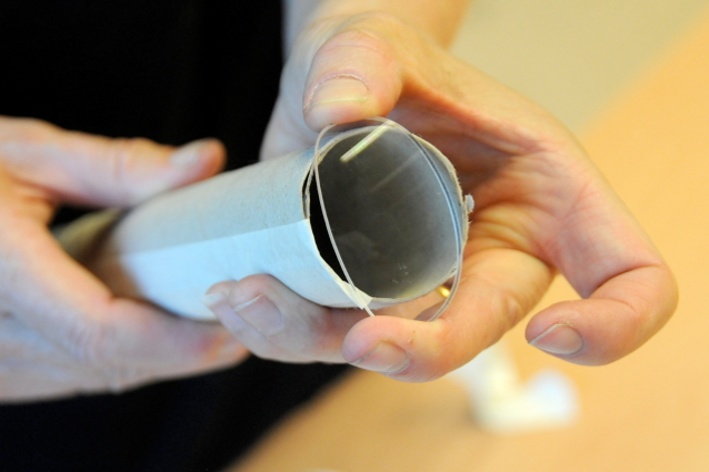 Start indoors by directing your telescope at something in the distance, like a person or a tree through a window. (Image 10) 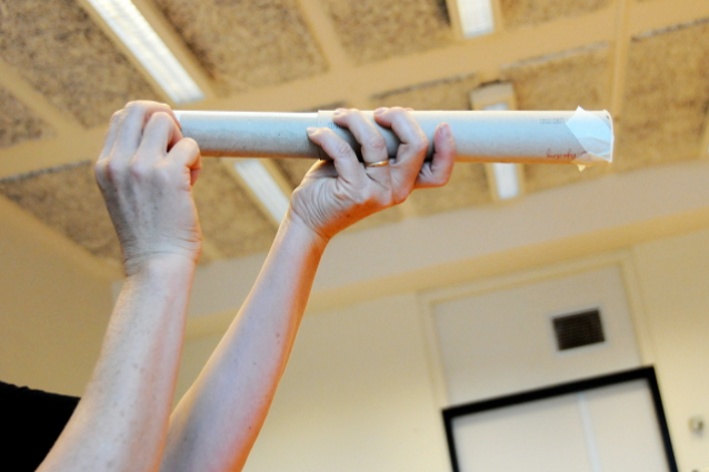 Look through the eyepiece while sliding the tube backwards and forwards until you see the image has focused. You'll notice that the image is inverted, that is, it's upside-down! (Image 11) 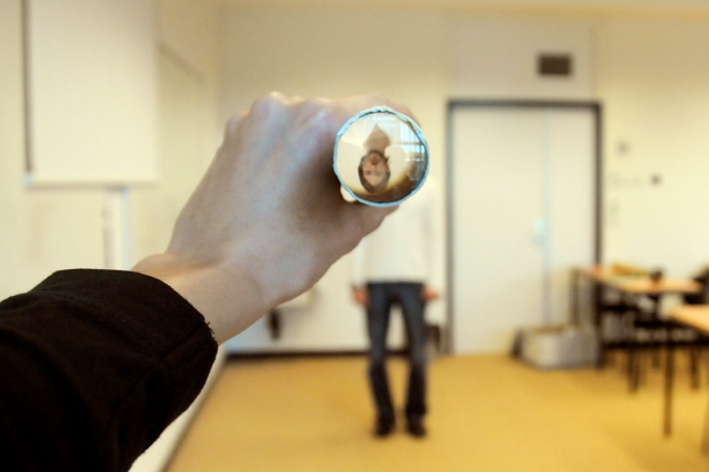 This activity can not be undertaken without first understanding the most important rule of sky watching: Never, under any circumstances, point your telescope at the Sun!