Creating eclipses in the classroom 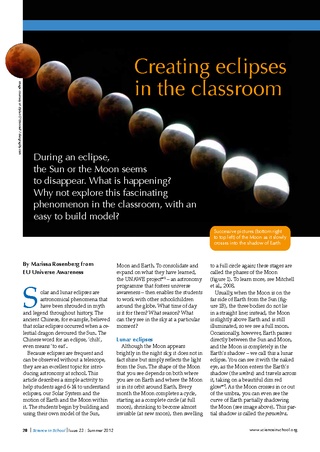 During an eclipse, the Sun or the Moon seems to disappear. What is happening? Why not explore this fascinating phenomenon in the classroom, with an easy to build model? Solar and lunar eclipses are astronomical phenomena that have been shrouded in myth and legend throughout history. The ancient Chinese, for example, believed that solar eclipses occurred when a celestial dragon devoured the Sun. The Chinese word for an eclipse, ‘chih’, even means ‘to eat’.

The delicately structured glow of the solar corona, as seen during the total eclipse of the Sun on 7 March 1970. The corona is visible to the naked eye only during an eclipse. Image courtesy of NSO / AURA / NSF
Because eclipses are frequent and can be observed without a telescope, they are an excellent topic for introducing astronomy at school. This article describes a simple activity to help students aged 6-14 to understand eclipses, our Solar System and the motion of Earth and the Moon within it. The students begin by building and using their own model of the Sun, Moon and Earth. To consolidate and expand on what they have learned, the UNAWE project – an astronomy programme that fosters universe awareness – then enables the students to work with other schoolchildren around the globe. What time of day is it for them? What season? What can they see in the sky at a particular moment?
Lunar eclipses
Although the Moon appears brightly in the night sky, it does not in fact shine but simply reflects the light from the Sun. The shape of the Moon that you see depends on both where you are on Earth and where the Moon is in its orbit around Earth. Every month the Moon completes a cycle, starting as a complete circle (at full moon), shrinking to become almost invisible (at new moon), then swelling to a full circle again; these stages are called the phases of the Moon (figure 1). To learn more, see Mitchell et al., 2008.

Successive pictures (bottom right to top left) of the Moon as it slowly crosses into the shadow of Earth Image courtesy of Dylan O’Donnell / deography.com
Solar eclipses
Unlike lunar eclipses, solar eclipses are very rare. Most people will never see one because solar eclipses are only visible from relatively small areas of Earth at any one time. Solar and lunar eclipses have somewhat different causes: during a solar eclipse, we are in shadow. When the Moon passes exactly in front of the Sun, it casts a shadow on Earth. Because the apparent size of the Moon is so much less than that of the Sun, this shadow will only be seen in a small area of Earth.

The ‘diamond ring’ effect occurs when only a tiny sliver of the Sun is visible around the Moon during a total solar eclipse. Image courtesy of Bill Livingston, NSO / AURA / NSF
To understand this, hold your thumb in front of the Sun so that it is completely covered. Your eyes are in the shadow of your thumb, but it does not affect the person standing next to you, as they are not in the same shadow. They see the Sun as normal. Once the Moon moves directly between Earth and the Sun, the sky takes on a spooky twilight, which causes animals to become confused. The air cools and, during a total eclipse, the Moon appears as a black disk in the sky surrounded by a crown of fire. That fire is actually the Sun behind the Moon; as the Moon passes, the full burning light of the Sun returns. Eclipses in the classroom Building the Sun-Earth-Moon system described below will allow your class to discover how and why eclipses happen. They will be able to understand exactly what they are seeing if ever they see a real eclipse. Building the model, which is not to scale, takes about 45 minutes. Materials For each model, you will need:

Step 3: making the base to support Earth. Image courtesy of Marissa Rosenberg

Step 5: Placing Earth on its base Image courtesy of Marissa Rosenberg

Step 10: Bending the wire so that the equators of the Moon and Earth are at the same height. Click on image to enlarge. Image courtesy of Marissa Rosenberg

Step 11: Adjusting the Moon and Sun so that the light from the Sun hits Earth’s equator and the Moon can directly block the Sun’s rays from reaching Earth. Image courtesy of Marissa Rosenberg

International collaboration
Collaborating with other schools worldwide can help your students to understand the subject even better.

w4 – A comparison of lunar and solar eclipses Resources See the website of the Lunar and Planetary Institute for another classroom activity to model an eclipse On the NASA Science website is Lunar Eclipse 2105: a fun, scientifically accuratestory of an eclipse being viewed from our Moon by a young boy. It could be a good starting point for other lunar eclipse activities. For photographs and information about the lunar eclipse of 15 June 2011, which could be seen all over Europe To find out how two school students investigated and observed an eclipse in a prize-winning project, see:Pathmanathan P (2007) Students Catch a Star: researching and observing a solar eclipse. Science in School 7: 39-44. www.scienceinschool.org/2007/issue7/catchastar

Review
Eclipses provide an excellent opportunity for students to understand how day, night and the seasons are affected by our position on Earth relative to the positions of the Sun and Moon. This article describes hands-on activities in which the students build a model of Earth, Moon and Sun to show lunar and solar eclipses. Models of heavenly objects serve to bring fascinating phenomena closer to the learner and enable students to make sense of an otherwise mysterious sky. The article also raises the possibility for students in different countries to link via video conferencing with other classes around the world and thus better understand how what we see in the sky at any one point is affected by where we are on Earth. Students learn best when they feel that they own the experience. In this way both the receiver and transmitter experience the learning in context. Angela Charles, Malta

Marissa Rosenberg graduated in astrophysics from the University of California, Los Angeles (UCLA), USA, then completed a master’s degree at the International Space University in Strasbourg, France. She is currently working on her PhD in astrophysics at Leiden Observatory in the Netherlands. Marissa is involved with EU Universe Awareness, writing astronomy articles for children. She has also completed three years of science teacher training through the California Teach programme at UCLA.

Originally published in Science in School