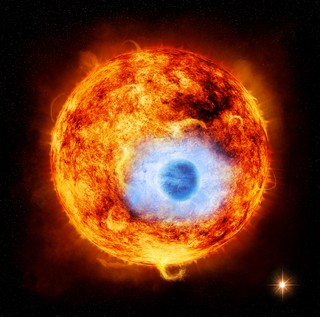 An artist has created this picture showing a distant star system. The blue planet is called HD 189733, it is an enormous gas giant over 100 times bigger than Earth! It orbits so close to its star that temperatures in its atmosphere reach over 1000°C! And the star is actually roasting away huge amounts of the planet's air – up to 600 million kilograms every second!