The Star That Lived Two Lives 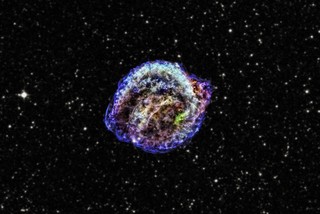 In 1608, a new star appeared in the night sky. It shone brighter than all the other stars, and for three weeks, it was even visible during the day! This mysterious beacon marked the explosive death of a nearby massive star. These explosions are called supernovae, and they give off so much light that for a few weeks, they can outshine a galaxy of billions of stars! Then, slowly they fade away, leaving behind beautiful glowing clouds of gas, like the one in this picture.