Our Universe is big, beautiful… and mostly invisible! 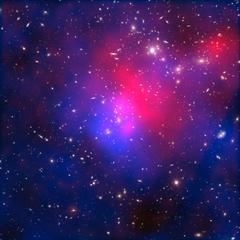 This picture shows a different group of galaxies that is much bigger than ours, which is called Pandora’s Cluster. The picture shows such a big part of the Universe that each galaxy only looks like a little white scratch on the photo! The galaxies are only a tiny part of what is really inside Pandora’s Cluster. It is also made up of hot gas (shown in pink in the photo) and lots of strange stuff that doesn’t give off any light at all – it is invisible to us! Astronomers call this invisible stuff ‘dark matter’.