A Flash from the Past 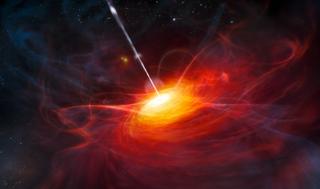 Astronomers look for distant objects in the cosmos because they tell us what the Universe was like when it was much younger. Quasars are special galaxies that are so far away that when we look at them we are looking at the Universe when it was still a baby. They are also incredibly bright – brighter than about 100 normal galaxies combined! It is only because quasars are so bright that astronomers can spot these distant galaxies in telescopes. But they are so far away that they only look like tiny dots of light in photos, so astronomers ask artists to draw what they think quasars look like, like the image shown above.