Unexpected Visitor in the Night Sky Caught on Camera! 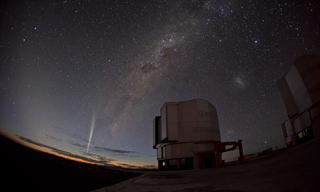 This photo shows an object called Comet Lovejoy, which was visible in the night sky last December. Comets are made of ice, dust and rock, so they are sometimes called dirty snowballs. They originally come from the outer regions of the Solar System, but they travel around the Sun in the same way that planets do. This means that sometimes they come close to Earth and we can see them in the night sky.