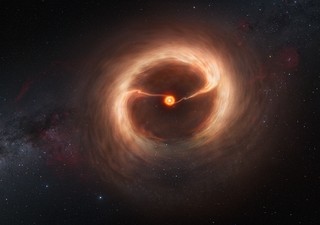 The more material the planet pulls in as it is forming, the bigger it grows. But planets are very messy eaters! As giant gas-guzzling planets feed, they pull in gas from the disc in long streams. Using a giant, powerful new telescope called ALMA, astronomers have spotted these gas streams flowing through the planet-forming disc of a young nearby star!