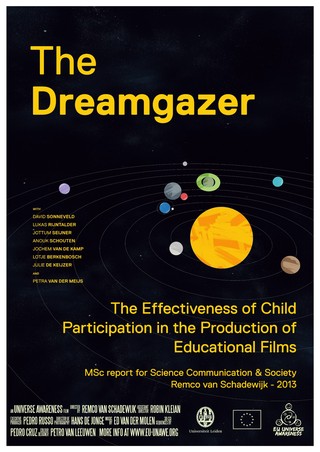 Child participation is a novel way of producing educational content for children. This research presents a combined approach of child participation based storytelling and professional production quality. The approach has been tested for its effectiveness in creating educational films for children. Child participation is an effective tool for the production of educational films for children. The inspirational power of narrative scientific films can be an effective addition to the toolkit of science educators around the world.  Child participation dictates equality between adults and children in project decision-making based upon the United Nations’ bill of child rights. This research report accompanies the release of the short film ‘De Dromenkijker’ produced by Universe Awareness, Leiden University. Seven children engaged in discussion with a film director during five weeks, starring in their own film about astronomy. Story writing, budgeting, production, post-production as well as recommendation for similar project are discussed in this report.