Importance of science education to development and capacity building 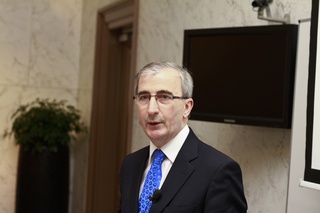 Speech on the occasion of the Opening Ceremony of the LC EU-UNAWE Workshop on 26 March 2012 by Mr. G.  Mitchell, Coordinator for European People's Party members of the Development Committee of the European Parliament.

Many thanks for inviting me to address this conference today- a particular thank you to George Miley, Vice President of the International Astronomical Union here at Leiden University, for facilitating my visit.

I first met George about a year ago in the European Parliament where he attended a breakfast meeting I organised on the Square Kilometre Array (SKA) - a revolutionary radio telescope that will allow scientists to address many of the fundamental, unanswered questions about the Universe we live in.

The event in question was to highlight South Africa's bid for the location of this telescope. Suitable sites for this telescope have been the subject of ongoing negotiations over the past year, and it was announced last summer that sites in South Africa and Australia were short-listed to host the central core of the SKA telescope. A final decision is expected next month.

One of the reasons why I supported South Africa's bid for the SKA is because I am a firm believer that the benefits of the SKA to South African industry and society will equal the astronomical discoveries it makes.

The benefits the SKA would bring to South Africa are a clear example of how science education can contribute to development and capacity building. SKA could become a powerful driver of socioeconomic growth in South Africa as well as its neighbouring countries. It could boost the region's human capital by attracting and training a new generation of highly qualified young scientists, technician and professionals, and create a whole new range of opportunities and international collaboration for the region's industry. In essence, I believe the SKA has the potential to effectively change the face of science in the whole Southern African region.

The role which universities have played in this bid is further proof of the strong links between education, science and development. South African universities in Cape Town, Stellenbosch, Rhodes, Western Cape, Witwatersrand and KwaZulu Natal and the Durban University of Technology have collaborated on this project with other major international universities. It is simply undeniable that the SKA will require a huge research and development effort for the South African education and information, communications and Technology sectors, which will ultimately benefit South African society at large.

As a Member of the European Parliament and EPP Coordinator on the Development Committee, my role is to push the EU's development agenda as well as to ensure its accountability. One of our focuses in the lead up to 2015 has been the Millennium Development Goals, particularly the most off-track ones of child mortality and maternal health.

Incidentally, the law on which EU Development Aid is based is the Development Cooperation Instrument. I had the honour to be Rapporteur for this regulation. It merged 14 existing regulations into one and took two and a half years to agree. For the first time, the European Parliament set targets- 20% expenditure on basic health, and 20% on basic education. The invitation I received to this workshop states: "EU Universe Awareness is a project initiated in The Netherlands that is being funded by the European Commission. It uses astronomy as a tool to inspire children from age 4 upwards, focusing on disadvantaged communities. The goals being two-fold, to introduce children to the fun of science, and to broaden their minds, thereby stimulating a sense of world citizenship and tolerance during a formative stage of their development".

Introducing children in such disadvantaged countries to the fun of science and to broaden their minds, are objectives we must support and build on.

However, to be educated, you first have to live.

23,000 children die every day in the developing world. The good news is that it used to be 36,000 children per day. We have made enormous progress in the past ten years: between 2000 and 2008 measles deaths worldwide fell by 78%, we are close to wiping out guinea worm, 46.5 million more children started going to school in Africa between 1999 and 2008, TB deaths are declining globally, more than 500 million people have been reached with antimalarial bednets in the past two years alone and between 2000 and 2009, 5.4 million child deaths were averted.

It is imperative that we speak of the successes in the developing world so that in these times of austerity in Europe, we do not give in to the temptation yet again and fail to meet our UN 0.7% of GNI development aid target. As our wealth decreases, our contribution may decrease but our percentage of GNI should not also decrease. We can harness public opinion to support development aid if we take time to educate people about its benefits and achievements, by telling the good news and showing that results are possible.

Furthermore, as the world’s population expands in the southern hemisphere by 2 billion people in the coming generation, it is my firm belief that we help make a thriving developing world our trading partner. The alternative is massive South-North migration and possible conflagration if we allow the current situation to fester.

Empowering communities within the developing world towards self-sufficiency will greatly improve the long-term sustainability for all of us. For that reason, it is essential to support domestic revenue generation and encourage a fair, reliable governance system to bolster enterprise. The EU Universe- Awareness project objective of stimulating a sense of world citizenship is one our own Hemisphere would greatly benefit from.

Science, with for example all the benefits the SKA telescope can bring in terms of socio-economic growth to South Africa and its region, has the capacity to empower developing countries to help themselves, and help us to build an inter-dependent and stable world.

I suspect most politicians are like me and know precious little about science and astronomy. It is only by greater engagement of scientists and academics with policy makers that MEPs, for example, who co-decide the laws and budgets of the EU, will be aware of the uses to which astronomy can be deployed.

The developing world can harness opportunities- be it in science or other sectors. It is my job as a Parliamentarian to ensure that the European Union steers its development agenda in this direction. We must do this for selfless as well as selfish reasons. It is in our interests as well the developing world's, but leaving interest aside, our common humanity demands that we rise to this challenge.

I look forward to hearing the presentations of the next speakers.