A long time ago, in a galaxy far, far away, billions of stars shone brightly. Fast-forward to today – an incredible 35 million years later – and the light from those stars has finally crossed the Universe and reached Earth. Light is faster than anything else in the Universe, but it still takes time for it to travel through space. After such an epic journey, it only seems right that astronomers have captured the light to make this beautiful new photo of the distant galaxy.

In the photo you can see that the colour of the galaxy is different in the centre and the outer regions. The galaxy looks more yellow and orange towards the centre (astronomers say it is “reddish”), while it is blue in the outer parts. This is because of the colours of the stars that are found in these regions of the galaxy. Older stars are redder than younger stars and live in the centre. Young stars are blue and live further out.

But when you look up to the night sky, why do most of the stars look white, rather than a dazzling variety of colours? This is because the light from most of the distant stars is so dim by the time it reaches us that the detectors in our eyes that pick up colours don’t work. So we are only looking at these stars in black and white! We only see the brightest few stars with colour vision, such as the red star Betelegeuse and the blue star Rigel, which are both found in the constellation called Orion.

Stars come in many of the colours of the rainbow: blue, yellow, orange and red – as well as some stars that really are white. But there are no stars that look green! 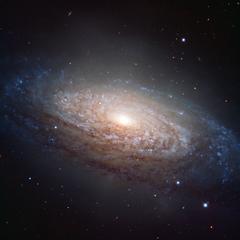 eso1129a
A Rainbow of Stars