Planets are not found around all stars. In fact, sometimes astronomers find them where we least expect them to be!

When a Sun-like star has burned up all its fuel, it begins to collapse inwards. The material in the star's core ends up squashed tightly down into a tiny ball called a white dwarf.

During this process, planets that orbit close to the star are usually swallowed up by the star itself. It is therefore not common to find planets orbiting white dwarf stars, especially not big planets…

But, this is exactly what astronomers have found!

For the first time, an intact, giant exoplanet has been discovered orbiting close to a white dwarf star.

The planet, formally known as WD 1856b, is around 13 times as massive as the planet Jupiter. It was found using data from the Gemini North Telescope of NOIRLab, NASA’s Transiting Exoplanet Survey Satellite, NASA’s Spitzer Space Telescope, and more.

This discovery tells us that it is possible for Jupiter-sized planets to survive their star’s demise. It also indicates that they can find a new home orbiting around the white dwarf star.

It is expected that our own Sun will one day become a white dwarf too (not anytime soon however!).

This means that much of our solar system will be swallowed up by our Sun as it nears the end of its life when transitioning into a white dwarf - including Earth. However, this new finding suggests that perhaps some of the larger gas planets in our solar system might survive!

White dwarfs are very dense (meaning they are tightly packed). In fact, if you were to capture just one teaspoon of a white dwarf, it would weigh as much as an elephant on Earth!

This Space Scoop is based on a Press Release from NOIRLab. 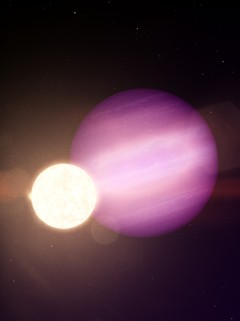