What is a planet? This sounds like it should have a simple answer, but only a few years ago this question was giving astronomers a headache! When they finally came up with an answer it had big consequences: The number of planets in our Solar System went from nine to eight!

The planet that was kicked out of the club is called Pluto. This was the most distant planet from the Sun and by far the smallest in our Solar System. Pluto is so small – it is actually smaller than our Moon – that many astronomers argued that it wasn’t actually a planet. Instead, they said it belonged to the group of small objects that were being discovered in the outer parts of the Solar System.

Then, in 2005, astronomers found an object in the outer Solar System, called Eris, which they thought was bigger than Pluto. From this discovery, Pluto’s fate was decided: it would no longer be called a planet. Instead, astronomers created the new title ‘dwarf planet’ for Pluto, Eris and other similar objects. Poor Pluto had been demoted!

However, recently astronomers were able to measure the size of the dwarf planet Eris more accurately and they have discovered that it isn’t bigger than Pluto after all – they’re actually about the same size. Who knows, maybe if astronomers had known the true size of Eris back in 2005, Pluto might have stood a better chance of staying on the planet team. Poor Pluto!

There is still no single definition for a ‘galaxy’ that astronomers around the world can agree on! The problem lies in the many small groups of stars that have been discovered in recent times, which blur the line between what are star clusters and what are galaxies. 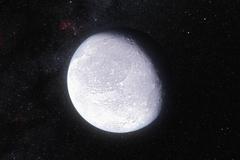 eso1142a
When the Planet Team Lost a Player