When you look at photographs taken at a birthday party or on a family day out, it’s easy to work out who is standing next to each other and who is far away in the background. But when you look at space photograph, where there’s no natural sense for how big objects should look, it is much more difficult to judge!

Take this new space photo, for example. It shows a cloud of dust and gas (shown in red) next to a bright star. However, the star is actually much closer to the Earth than the cloud is.

Stars like this, which lie between the Earth and the object that an astronomer is trying to observe, are called ‘foreground stars’. They are much brighter than the other stars in photos because they are closer to us.

The foreground stars appear to have straight lines of light coming out of their centres, but these lines aren’t really there in the Universe. Instead, the lines are created by light bending around the supports that hold one of the mirrors inside the telescope, and are only visible for very bright objects. These fake lines are called ‘diffraction spikes’.

Although diffraction spikes add something to the photo that shouldn’t really be there, many people like them and think that they look nice. In fact, some people even add extra diffraction spikes to the stars in their space photos by drawing them onto their pictures using photo-editing software!

The cloud in this image is an incredibly cold place: -260 degrees Celsius! 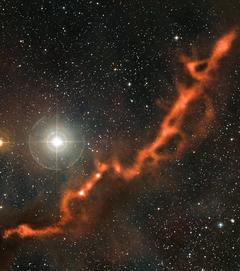