Did you know that the sounds we hear on Earth are just vibrations of air? But that doesn’t mean that space is an eerily silent place, just because there isn’t any air out there. This is because air is a collection of gases, and there are clouds of gas in space that can vibrate and allow sound to travel too.

Okay, so we know how sound can travel in space, but what’s making all of the noise? The answer is powerful objects that give off huge amounts of energy – enough to make the gases vibrate.

For example, in addition to gobbling up material, black holes also release powerful jets of energy. Astronomers already know that the black hole at the centre of a collection of galaxies called the Perseus Cluster is powerful enough to make a very deep sound.

"We thought that these very deep sounds might be found in galaxy clusters everywhere," says astronomer Ryan Foley. However, Ryan is a member of a team of astronomers who have recently observed a galaxy cluster called the Phoenix Cluster (shown in the photo above) that is almost completely silent. This means that either not all galaxy clusters produce sound, or that sometimes the music stops!

As well as real sounds in space, astronomers sometimes convert the light that they observe into sounds so that they can analyse it better. Check out the weird space sounds made from light on this NASA website. 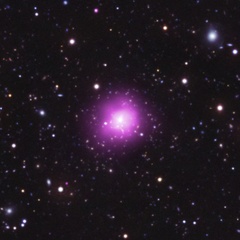