Have you ever pulled at a loose bit of thread on one of your jumpers and it just keeps unravelling? Astronomers have spotted a similar thing happening in space! Two stars orbit each other in what is called a binary system. As one star moves, it pulls with it loose material from around its companion star, twisting the material into an impressive spiral shape!

The star at the centre of this picture is a red giant. This used to be an average-sized star (like our Sun), but as it got older, it expanded. The star grew much bigger but produced no extra heat, so it cooled down. As its temperature lowered, the star became more red. This might seem strange, since we use red for ‘hot’ in everyday life, such as on water taps. But in astronomy it is the opposite: the hottest stars are blue and the coolest are red!

Red giants can grow up to tens or even hundreds of times bigger than the Sun. The stars become so big that they have trouble holding on to their outer layers of material. At this stage they lose a huge amount of their material into space. The stars end up surrounded by a thick cloud of gas and dust.

Almost all stars eventually grow into red giants, wrapped in an envelope of gas and dust. But this is the first time astronomers have ever seen the glowing gas spun into a spiral! The unusual shape can only have been created by an unseen companion star. The star itself is too dim for us to see, but it's definitely making itself known to us through this cosmic spiral!

Red giants blow out so much material that they provide most of the gas and dust to make up the next lot of stars and planets, and they even contribute to life. In fact, you've probably got some red giant in you!

This Space Scoop is based on Press Releases from ESO, SAAO.

This Space Scoop is based on ESO and SAAO press releases. 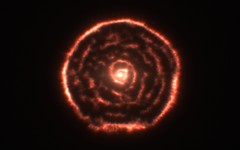 eso1239a
You Spin Me Right Round