Astronomers have set out on a hunt to catch as many planetary nebulae as they can! Planetary nebulae are simply glowing clouds of gas and dust; they actually have nothing to do with planets at all. Now, using NASA's Chandra X-ray Observatory, astronomers are trying to track all of these clouds within our part of the galaxy. This picture shows two otherworldly planetary nebulae that they've captured already!

These clouds show us a phase of life that all medium-sized stars, like our Sun, eventually go through. When a star has burned all its fuel, it expands into an enormous red giant. It can swell to hundreds of times its size! At this size, the star has trouble holding on to its outer layers of material. A large amount of material from the star's outer shell blows off into space.

The hot core of the star is left behind. It soon begins to collapse in on itself. All the material in the core ends up squashed tightly down into a tiny, heavy star. This is called a white dwarf. A white dwarf with the same amount of material as our Sun would only be the size of Earth!

Gas and dust shed by the star forms a planetary nebula (a nebula is the word for just one nebulae). The nebula surrounds the white dwarf in a colourful cocoon. These gassy shells come in many shapes and sizes, you can see four examples here. On one of the images two symmetrical clouds swirl out on either side of the central star. It looks like the wings of a butterfly! 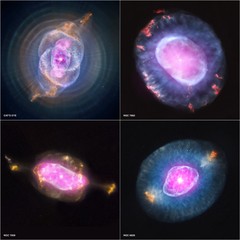