The Sun that lights up our sky during the day, and the twinkling points of light that shine in the night sky, are all stars — giant balls of burning gas. Stars are born deep inside thick clouds of gas in space. Astronomers tell us this, but to find out for themselves they had to build special telescopes that can capture light our eyes can't see. These telescopes allow them to peer into the dark, star-forming clouds to catch a glimpse of what lies beneath.

This picture was captured using one of these new telescopes, called APEX. This powerful telescope was designed to spot the heat glow of dust like this, to reveal the hiding places where new stars form. Although we can't see the stars themselves, their intense heat has caused the clouds around them to warm up. These warmer patches of cloud have been photographed by APEX. In this picture, they are shown as a brilliant orange colour. Doesn't it look like the young stars have set the clouds on fire?

Collecting non-visible light (light we can't see with our eyes) from space is a tricky business. If your telescope is on the ground, then data from space can get mixed with data from our atmosphere. To tackle this, astronomers sent balloons high up into the atmosphere with equipment on board to study space. One of these balloons reached over 50 km high! 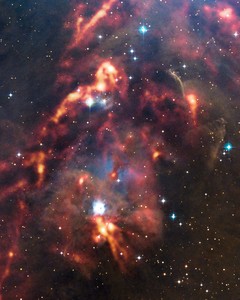