The star sat at the centre of this photograph is Betelgeuse. Betelgeuse rides on the shoulder of the constellation Orion the Giant (also known as Orion the Hunter). Constellations are pictures in the night sky of objects, animals and humans that are made by joining up stars like a connect-the-dots puzzle! Orion can easily be seen with the naked eye in the northern hemisphere on winter nights, and Betelgeuse is the orange-red star above and to the left of Orion’s famous three-star belt. If you can, go outside tonight and take a look for yourself!

In this picture, Betelgeuse might look tiny, but it is a Red Supergiant — about 1000 times bigger than our Sun and shining 100,000 times brighter! But its impressive looks come at a high price. Betelgeuse is on its way to a nasty end as a powerful explosion. Astronomers call this type of explosion a supernova. Look at this picture; you can see it's already begun to lose some of its outer layers of material!

Like the Sun, Betelgeuse used to be an average-sized star. But as it got older, it swelled up so big that it began to lose control of its outer layers. This material has been blown away into space and formed the arc you can see on this photo, curled around the left side of the star.

If you take a close look, you can also see a strange, straight line of material on the left side of the image. Scientists believe this bar is completely separate from the star. It's most likely the edge of a dark cloud of gas and dust that has been lit up by Betelgeuse's intense glow. If they're right, it looks like Betelgeuse is heading for a collision in the near future!

As far as distances in space go, Betelgeuse is a pretty close star to Earth. This means that when it does finally go supernova, it will be a spectacular sight, shining almost as bright as the full moon in our night skies!

This Space Scoop was based on an ESA press release. 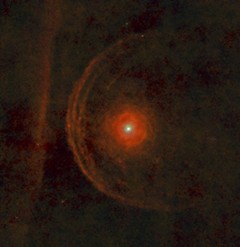 Betelgeuse_arc
Standing on the Shoulders of Giants