Neutron stars are the ultra-dense cores left behind after a massive star reaches the end of its life and explodes. The star's outer layers are blasted away in the explosion, but material at the centre of the star collapses in on itself, thus forming a tightly packed ball of material. What we end up with is the densest (meaning 'most tightly packed') object known in the entire Universe outside of a black hole: a neutron star!

This new space picture shows a group of stars called a ‘globular cluster’. These are some of the oldest objects in space—almost as old as the Universe itself! This means that many of the stars within have already lived out their lives. The most massive have long since exploded, leaving behind several neutron stars.

Using a neutron star within this cluster, along with several others, astronomers have worked out the relationship between the stars' mass (how much material they have) and their size.

The new data shows that an average neutron star, with the same mass as around one and a half of our Sun's, would be around 12 km across. That's about the size of a small town! With all this material packed down into such a small space, neutron stars are unbelievably dense objects. The pressure at their centres is over ten trillion trillion times the pressure required to form diamonds inside the Earth.

Neutron stars are packed so densely that they are almost perfectly spherical. The highest possible ‘mountains’ on their surface would rise just 5 millimetres high!

This Space Scoop is based on a Chandra Press Release. 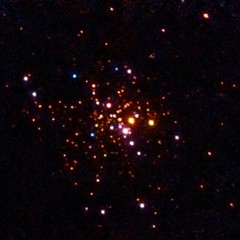