Have you ever wondered why people on the other side of the world don't fall off? In the 17th Century, a man called Isaac Newton came up with an answer: gravity.

Newton explained that gravity is a force that attracts all bodies that have mass. Gravity is responsible for keeping your feet on the ground and keeping the Earth and all other planets in our Solar System in their orbits around the Sun.

But, more recently, Albert Einstein came up with another idea for what gravity is. Einstein's theory of gravity, known as the theory of General Relativity. This suggested that gravity is actually the curving of the fabric of the Universe, known as 'spacetime', around objects.

For instance, a very heavy star warps the space around it, causing a deep well in the fabric, and pulling in anything that comes too close. You can picture this as a cannon ball warping the surface of a trampoline. A much lighter object would curve the surface of the trampoline much less: a feather would barely make a dent.

But this curving of spacetime was very difficult to measure and observe. And good science demands proof to confirm theories. Very recently a strange system of two exotic stars orbiting each other have slunk into our telescopes and provided us with the perfect laboratory to confirm Einstein's theory of gravity, and investigate it more deeply.

The pair of exotic stars include a white dwarf star and the most massive neutron star ever seen! As the two stars move around each other, they create ripples in the fabric of spacetime. These are known as 'gravitational waves' and they carry energy away from the star system.

This picture shows an artist's impression of how this might look. This special two-star system allows us to monitor how much energy is lost and compare it to Einstein's prediction. And guess what? His prediction matches what we actually see happening with great accuracy. So far, it looks like Einstein was right about gravity!

On Earth, gravity isn't entirely even. This is because the Earth isn't a perfect sphere, it is slightly lumpy and uneven. And uneven weight distribution means uneven gravity. 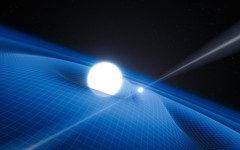 eso1319a
The Warped Fabric of Our Universe