There's no atmosphere in space. This means that there is no weather; no cool breeze, no torrential rainfall and definitely no snow...but there are clouds. Nebulae are clouds of gas and dust in space. ‘Nebula’ is actually the Latin word for 'cloud'. These clouds come in many different varieties: some are the remains of dead stars, while others are areas of vigorous star birth, like this one. In fact, two different types can be seen in this striking new image: emission nebulae and reflection nebulae.

This colourful object is called NGC 6559. It is mainly made up of hydrogen, the raw material needed to form stars. When an area inside a nebula like this gathers enough material, it begins to collapse under its own gravity. It grows hotter and hotter until finally, nuclear fusion begins. This means that the hydrogen atoms ‘fuse’ together to form helium atoms. This process releases energy, which makes the star shine. Thus, a new star is born.

These brilliant new stars are born deep inside dust clouds, which obscure them from our eyes. However, they shine hot and bright within their gassy cocoons and pass on energy to the hydrogen gas around them in the nebula, causing it to shine. This is how the glowing, red threadlike cloud seen near the centre of this image was created. This is known as an emission nebula.

But NGC 6559 is not made of only hydrogen gas. It also contains solid particles of dust made from materials such as carbon and iron. The bluish patch next to the red emission nebula shows light from recently formed stars being scattered—in other words, reflected in many different directions—by these tiny particles. This is known as a reflection nebula.

When starlight hits the dust particles in a reflection nebula such as this one, the light is scattered in all directions. Blue light scatters much easier than light of other colours because it travels as shorter waves. (Learn more about light waves here.) This is why reflection nebulae often appear blue. 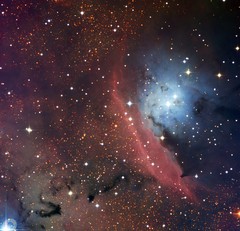 eso1320a
Cloudy with a Chance of Star Birth