The distances between stars are so immense that we can't use miles or kilometres to measure them, the numbers would become too large. For example, the closest star to our Solar System, is a whopping 38,000,000,000,000 kilometres away! And that's the closest star. There are stars that are billions of times farther away than that. No one wants to write or talk about numbers that have 20 digits in them!

So, for distances in space we use a different measurement: the time taken for a light beam to travel. When travelling through space, light moves at a set speed of nearly 300,000 kilometres per second. Nothing in the known universe travels faster than the speed of light.

If you somehow managed to cheat the laws of physics and travel as fast as a ray of light, it would still take 160 000 years to reach the object in this photograph! And this cloud is inside one of the Milky Way’s closest neighbours, a nearby galaxy called the Large Magellanic Cloud. This new image explores colourful clouds of gas and dust called NGC 2035 (seen on the right), sometimes nicknamed the Dragon’s Head Nebula.

The colourful clouds of gas and dust are filled with hot new-born stars which make these clouds glow. They're also regions where stars have ended their lives in terrific blazes of glory as supernova explosions.

Looking at this image, it may be difficult to grasp the sheer size of these clouds — we call the distance light can travel in a year a “light-year” and each one is several hundred light-years across! The Large Magellanic Cloud is enormous, but when compared to our own galaxy it seems very humble indeed, stretching just 14 000 light-years, which is about ten times smaller than the Milky Way!

If you look up into a starry night sky, the most distant object you can see with your naked eye is the Andromeda Galaxy, which is over two and a half million light-years away! Think how big it must be, to be so far away and still be bright enough for you to see it without a telescope! 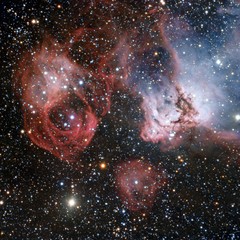