If you've ever broken a bone, you'll know that X-rays are bad for humans. When doctors take an X-ray picture of a broken bone, they hide behind a protective screen to avoid being hit by X-ray radiation.

But the radiation you receive from an X-ray machine is 50 times less than the radiation we are blasted with every year from cosmic sources. Fortunately, our atmosphere blocks these X-rays, so we’re perfectly safe here on Earth.

Some of the most powerful sources of X-rays in the Universe are ‘X-ray binaries’. These are pairs of stars where one star is normal, like the Sun, and the other is an ultra-compact type star called a ‘neutron star’.

A new study of an X-ray binary called Circinus X-1 found that it is less than 4,600 years old! This makes it the youngest X-ray binary ever seen. Astronomers have discovered hundreds of X-ray binaries throughout our Galaxy and even some outside our Galaxy.

All of these X-ray binary star systems are old, so they only reveal information about what happens much later, in their life. With these new observations, we can still see the shock waves created when the system was formed! 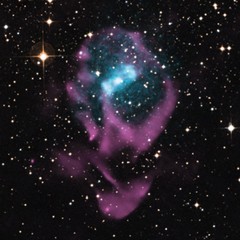 cirx1_chandra
Exotic Star System is the Youngest Ever Found!