Star-filled galaxies like the Milky Way are not just randomly scattered across the Universe, they are found in groups or clusters. For example, our Galaxy is a member of the Local Group along with around 30 other galaxies. Galaxy clusters are simply much larger versions of groups.

If you imagine that galaxy groups are like towns, clusters are cities and galaxy superclusters are the countries that these towns and cities lie within.

But the story doesn’t end there. All of the galaxy superclusters in the Universe form what we call the ‘cosmic web’.

An artist created this picture to show a section of the cosmic web. Like a spider web, you can see that it has a delicate lace-like pattern that criss-crosses over the entire cosmos, where each dot is a galaxy like our Milky Way.

A new study of the cosmic web has revealed secrets about its role in the history of the Universe. A long time ago, when the Universe was just half its current age, galaxies caught in the cosmic web began to speed through their lives much faster than those found elsewhere.

Astronomers think this happened because of peer-pressure from near by galaxies. Galaxies clustered along the arms of the cosmic web would interact in ways that caused them to use up their gas to make new stars and rushed them towards the end of their lives!

If the Milky Way galaxy was a sesame seed, then the cosmic web of the observable universe would be the size of Great Pyramid of Giza. 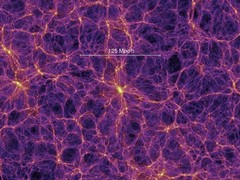