Each one of the tiny lights twinkling in the night sky is a gigantic burning star. Like people, these stars come in different colours and sizes. Some are 10 times smaller than the Sun; others can be 300 times more massive!

One of the most intriguing questions about the Universe that still needs answering is how such a wide variety of stars are born. The existence of massive stars is particularly mysterious, and difficult to study.

This means that we need very powerful telescopes to peer into distant star forming clouds and study the birth of massive stars. Powerful telescopes like ALMA. ALMA is perfect for peering through the gassy clouds surrounding newly born stars.

This picture shows a massive-star nursery that is currently being studied by astronomers using ALMA. They’ve just discovered that the orange gas cloud in the middle contains not one, but two enormous baby stars!

Altogether, there is enough gas in this system to create over 1000 suns. All this gas is hiding them, and makes it very difficult to see the two stars directly. Astronomers only know they exist because they are acting just like human babies and throwing a tantrum! The blue clouds on this picture are jets of gas being thrown into out of the central cloud by the two stars. Like babies throwing their toys from a pram.

It takes around 100,000 years to give birth to a massive stars. That might sound like a long time, but it’s 10 times faster than the birth of less massive stars 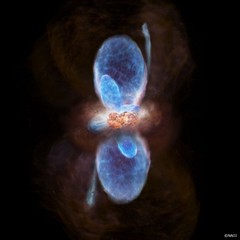