A famous Greek story tells the tale of a beautiful golden-haired lady called Medusa. Medusa was vain and selfish, which eventually got her into trouble with the powerful goddess Athena. As a punishment for her bad behaviour, Athena turned each of Medusa’s beautiful golden locks of hair into a poisonous snake.

Are you wondering what this tale has to do with Astronomy? Well, the cosmic cloud of gas and dust in this picture is called the Medusa Nebula because astronomers think the smoky curtains of gas look like the snakes on Medusa’s head. What do you think?

The similarities between these two stories don’t end there. The gas from this cosmic cloud was once inside a beautiful golden star, similar to our Sun. But, like Medusa’s golden locks, the star didn’t stay this way.

As the star grew older it also grew larger. For millions of years the star expanded in size, until it finally became so large, the gas furthest from the middle drifted away. This material was lost into space where it blossomed into the colourful shape we see in this image. We call these clouds planetary nebulae.

For tens of thousands of years this planetary nebula will surround the remains of its parent star. But this stage makes up just a tiny amount of the star’s total lifetime. Just as the time it takes you to blow a bubble and see it drift away, is a brief instant compared to your whole life.

The parent star within the planetary nebula is now what we call a white dwarf and will stay this way for tens of billions of years – that’s longer than the Universe has existed! 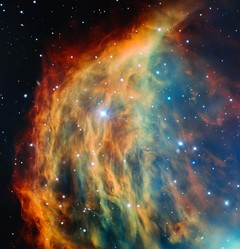 eso1520a
The Tale of Two Medusas