Jupiter is our Solar System’s very own superhero. The giant planet is two and a half times more massive than all the rest of the planets in our Solar System combined. And with great mass, comes great gravity. With the power of super-strong gravity, Jupiter plays a heroic role in our Solar System, protecting life on Earth.

Remember the asteroid impact that wiped out dinosaurs 65 million years ago? Without Jupiter, many others could have struck the Earth throughout human history. These destructive collisions might even have prevented human life from ever starting!

But luckily for us, Jupiter’s gravity diverts most comets and asteroids that could head towards us on Earth well before they reach us. For this reason along with many others, astronomers think that solar systems similar to our own are the most likely places to find alien life.

Unfortunately, we have found lots of solar systems with massive planets that lie close to their star, but not so many that lie far away, like Jupiter. That’s because spotting planets that lie further out in the darkness of space is much trickier.

However, astronomers have just found Jupiter’s doppleganger — a planet the same size as Jupiter that orbits around a star like our Sun. It also orbits at about the same distance from its star.

This finding gives us new hope that a solar system just like ours might exist, and alien life might exist there, partly in thanks to its very own life-saving superhero!

Jupiter might be our superhero, but it’s no gentle giant. The planet is covered by ferocious hurricanes that can rage for hundreds of years! 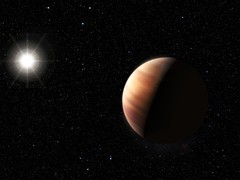