The beautiful bubble in this space photograph is the glowing ghost of a star that was caught haunting the darkness of space. Did you know stars turn into ghosts when they die?

This object is the ghost of a star that was once very similar to our own Sun. The ghost is called a planetary nebula, and it’s formed from the lingering remains of a dead star.

This shimmering nebula is nicknamed the Southern Owl Nebula, because it looks like an owl when seen by smaller telescopes (believe it or not!).

Planetary nebulae form when dying stars lose control of their outer layers of gas, which float off into space. Although they are beautiful, planetary nebulae are a short-lived cosmic marvel. They lastfor thousands of years, whereas the stars that make them can live for several billion years!

These space ghosts have an important role to play in the Universe, they create cosmic dust. Cosmic dust includes important chemicals such as carbon and oxygen. Without these chemicals there would be no life that on earth, and they are only created in the bellies of stars.

When a stars dies, these chemicals escape into space and can form into new stars or planets, or even living creatures like us! As the famous astronomer Carl Sagan once said: "We are made of star stuff."

The Southern Owl Nebula was made by a star similar to our Sun, but it’s grown to almost four times the size of our Solar System! 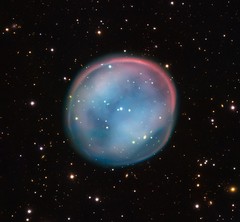 eso1532a
Ghost of the Southern Skies