For dozens of years, black holes have been the undisputed champions of forming powerful jets. In comparison, other objects make puny jets that are rarely bright enough for us to see. But now astronomers have discovered a star that wants to challenge the title.

The challenger is a type of super -compact star called a neutron (pronounced NEW-tron) star. The star lies in a double star system (with a companion star) and was recently seen blasting out incredible amounts of material into space.

When neutron stars have a nearby “companion” star, they often steal the gas from their friend. When this happens some of that gas is blasted into space at incredible speeds, creating a spectacular display.

The more material the star steals from its companion, the brighter the jet becomes. But when astronomers looked at the neutron star making these brilliant new jets, they saw that it was only stealing a tiny trickle of material. That’s not normally enough material to cause such impressive jets.

It turns out that the neutron star behind these jets is quite unusual. It can spend years at a time sitting quietly in space, collecting gas (which it was when astronomers observed it), before suddenly flaring up. While the jets may be short-lived they are definitely spectacular!

This Space Scoop is based on a Press Release from ASTRON. 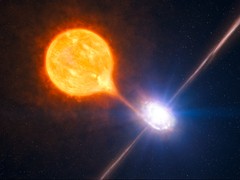