Everyone loves a clear blue sky. But do you know why the sky is blue? Why is it not green or yellow or pink? The answer to this question can be found by looking at the blanket of particles surrounding Earth. We call this Earth’s ”atmosphere”.

Earth’s atmosphere is filled with billions upon billions of tiny particles. These particles are too small to be seen by the human eye, yet they are incredibly important to life on Earth. They provide oxygen for us to breath, block harmful cosmic rays and keep out the cold of space at night.

As light from the Sun travels through the atmosphere, most colours are able to reach the surface without a problem. However, blue light knocks into the tiny particles in the air and bounces it off them in all directions, making the sky look blue. We call this Rayleigh scattering (pronounced “Ray-lee”).

Just last week LCOGT astronomers spotted Rayleigh scattering in the atmosphere of a distant alien world! They were using the LCOGT network of 1-metre telescopes, which are much smaller than telescopes previously used to make these sorts of measurements.

This is the first time blue skies have been spotted on such a small exo-planet (just 4x bigger than Earth, about the size of Neptune). Plus, the discovery shows that even small telescopes can play a large role in studying the atmospheres of alien worlds!

LCOGT’s telescopes are used by schoolchildren to explore the cosmos! What would you study if you could use 1-metre, robotic telescopes? Tell us at unawe@cardiff.ac.uk and you might win some telescope time of your own!

This Space Scoop is based on a Press Release from LCO. 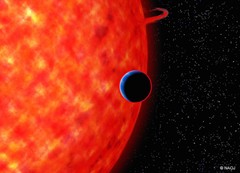