This picture was drawn by an artist. It shows us an up-close view of the winner of the Brightest Galaxy in the Entire Universe Award. Although this galaxy is a thousand times brighter than our own Milky Way galaxy it’s impossible to take a detailed photograph, even with the most powerful telescope because it lies over 12 billion light years away.

There’s a simple rule in space: the brighter an object is, the more violent and aggressive it is. For example, the most dazzling cosmic objects include exploding stars, stars crashing together, or explosive galaxies like the one in this picture which blasts out as much light as roughly 350 trillion Suns!

This is a special type of galaxy called a Quasar (kway-zar), which means there is a supermassive black hole in its centre. It spews out powerful jets of light and particles at two million kilometres per hour!

While this violent behavior may have made this galaxy a cosmic celebrity, it has shortened its life dramatically. It is ejecting its entire supply of star-forming material!

Most quasars shine brightly, but a small number are amazingly dusty. We call these Hot DOGS, which is short for Hot, Dust-Obscured Galaxies. 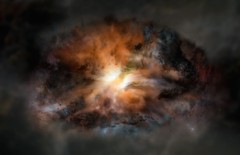