Space is a dark and empty place, but it doesn’t have to be lonely. The gas giants – Jupiter, Saturn, Uranus and Neptune – each travel with dozens of companions.

Earth has the Moon, of course. And it turns out that for more than 100 years, Earth has enjoyed the company of a faithful asteroid friend, too!

The asteroid, called Asteroid 2016 HO3, was discovered in April. As it orbits around the Sun, the asteroid circles Earth in an ongoing game of leapfrog! Watch the video below to see the path it travels.

The little asteroid is located too far away from Earth to be a true satellite, like the Moon. Instead we call it a "quasi-satellite" (pronounced kwah-zee).

Still, it appears quite devoted to us. The asteroid loops around Earth, but never wanders very far away as we both go around the Sun. It will continue to follow this pattern as Earth's companion for hundreds of years to come.

The asteroid never roams further than 100 times the distance between Earth and the Moon. The closest it ever gets to Earth is 38 times the distance from the Earth to the Moon (14 million kilometers). That means our cosmic companion definitely doesn’t pose a threat to humans. Phew!

We’ve teamed up with Las Cumbres Observatory to create a cool new website that allows you to track asteroids! The website was designed to celebrate Asteroid Day on 30 July 2016. Don’t miss out, to join in go to http://asteroidday.lcogt.net

We’re not sure exactly how big the asteroid is, but they think it’s probably no bigger than a football field. 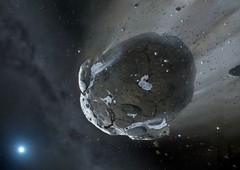