When early explorers first set out west across the Atlantic Ocean, many people thought the world was flat. They worried that if you sailed far enough, you would drop off the Earth into nothing.

Today, not only has every corner of the Earth been thoroughly explored, we've also visited every other planet in our Solar System. The obvious next step was to begin exploring ‘exoplanets’ — worlds beyond our Solar System.

In 1992, we tracked down the first planet orbiting a distant star. Since then over 3,300 distant worlds have been recorded. These worlds are even more fantastical than those from Star Wars or Guardians of the Galaxy.

There are planets that loom over 9,000 times larger than Earth, others are not much bigger than the Moon. Some smoulder hot enough to melt steel, others are frostier than Pluto.

We’ve discovered exoplanets orbiting giant stars, dead stars and even “rogue” planets that wander through the galaxy alone, without a parent star!

Yet the most exciting exoplanets of all are those similar to our home planet. These are the planets that could carry life: rocky planets where the temperature is cool enough for liquid water to exist on their surface.

It turns out there is a planet just like this orbiting the closest star to our Solar System!

Our new neighbour is slightly more massive than the Earth and orbits even closer to its star than Mercury does to the Sun. However, because its star is much cooler than then Sun, the new planet is still a comfortable temperature.

But is it comfortable enough for life? We're not sure yet, but you can bet this is the next question astronomers will be trying to answer!

There’s a plan to send a spacecraft to Proxima Centauri in 20 years. It will be called StarShot.

This Space Scoop is based on Press Releases from ESO, LCO. 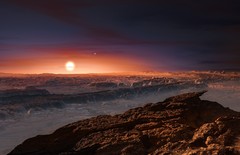 eso1629a
Could Aliens Be Closer Than We Thought?