We live in one of the spiral arms of a gigantic spiral galaxy called the Milky Way. A galaxy is a gigantic collection of stars, bound together by gravity. The Milky Way is so big that it takes light roughly 100,000 years to cross from one side to the other.

Due to its immense size, we don’t have the ability to travel beyond the Milky Way (yet). This means we must study it from within.

If you’ve ever been in a hedge maze, you might understand why this is difficult, and why there are still so many unanswered questions about our cosmic home: Exactly how big is the Milky Way? How old is it? How much does it weigh? When did it form? What shape is it? Where are the stars? How fast do they move?

Soon, these questions will be answered for the first time by a new satellite called Gaia (pronounced “Gy-er”), which is taking the best pictures of the Milky Way ever seen!

Gaia is a satellite, which was launched into orbit around the Sun in December 2013. Using a super-powerful video camera Gaia will measure the distance to stars and create the most detailed map of our Galaxy yet!

For any cosmic object, you need to know its exact distance to tell its size and brightness, and everything else about it.

Astronomers believe there are roughly 100 thousand million (100,000,000,000) stars in the Milky Way. Until today we only knew precise distances to a few hundred of these. Gaia’s mission is to provide accurate distances for one billion stars.

Today, Gaia has released it’s first set of images, of the 1,100 million stars is has observed; including around 400 million objects that have never been seen before! This picture shows Gaia’s first sky map.

There is so much information that scientists are asking the public for help making discoveries. If you’d like to get involved visit the Gaia Alerts page at www.gaia.ac.uk/alerts

Gaia will measure the location of stars to accuracy equal to measuring the width of a human hair at the top of Scotland from the bottom of England! 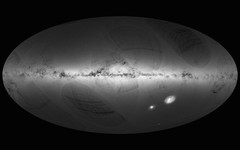