One of the coolest characters from the Marvel Universe is J.A.R.V.I.S.; Tony Stark's (AKA Iron Man’s) home computing system. J.A.R.V.I.S takes care of everything from tuning Stark’s home heating systems to navigating the Iron Man armour.

Unfortunately, J.A.R.V.I.S. isn’t real, however supercomputers are real, and they’re used to do all kinds of incredible things! Supercomputers have simulated the birth of our Universe, and even revealed how it may eventually end.

This month scientists used a supercomputer to solve a two-year mystery: The Mystery of the Monster Pulsar.

In 2014, a space telescope detected some unexpected ‘blinking’ signals coming from what we believed was a feeding black hole. (Unlike us, black holes eat anything that gets too close — including stars and planets!)

While black holes are normally invisible, as they feed they pull in material so quickly that it becomes super-heated and begins to shine, similar to the way rubbing two sticks together can start a fire.

The more a black hole eats, the bright it becomes…to a certain point. Eventually a sort of “traffic jam” occurs as the in-falling material piles up. This limits the amount of material being swallowed.

Black holes have super-strong gravity, allowing them to overcome this traffic jam effect to keep growing brighter. The object detected in 2014 shone brighter than 10 million suns!

For a long time, it’s been believed that only these heavyweights of the Universe were massive enough to bypass the traffic jam and grow into super-bright X-ray sources (called ULXs). But black holes don’t blink, so what was this strange object?

This is where supercomputers come in. Astronomers aren’t able to travel to the ULX, which lies 12 million light years away. Instead, they simulated the odd, “blinking” ULX on a supercomputer in a lab on Earth.

Despite everything we thought we knew, the simulation showed that it may actually be possible for a type of bright, blinking star called a “pulsar” to also bypass the cosmic “traffic jam”. It’s time we gave this monster pulsar it’s well deserved moment in the spotlight!

The fastest computer in the world is China’s TaihuLight (pronounced ty-hoo-light). It is capable of performing an astounding 93 quadrillion operations per second; that’s 93 million billion compared to a normal computer which carries out around a billion operation per second! 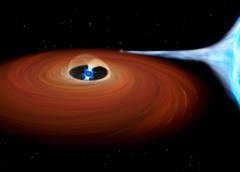 monster_pulsar
The Mystery of the Monster Pulsar