Every single day, the Earth is bombarded by more than 100 tons of dust and sand-sized particles. That’s the same as the weight of 14 elephants.

Once a year, an asteroid the size of a car hits Earth's atmosphere and burns up as a giant fireball before reaching the ground.

Every 2,000 years, a space rock the size of a blue whale hits Earth. And once every few million years, an object large enough to threaten humanity’s future comes along.

Don’t fear, all sorts of wacky methods have been devised to keep Earth safe from these rare cosmic threats. These range from blowing the asteroids up using nuclear weapons to hitting them with a spacecraft to knock it off its collision course.

But to stand a chance of protecting Earth from a deadly impact, we first need to discover all asteroids that pose a threat. Scientists around the world have been working hard to do this. So far, 15,000 of these so-called ‘Near-Earth Objects’ have discovered – with many more to go.

Near-Earth objects, or NEOs, are asteroids or comets whose orbits come close to ours, meaning they could hit our planet.

The chance that any of the 15,000 NEOs we’ve discovered will impact the Earth in the next 40 years is very small. However, it’s important to watch them closely to check they don’t change course.

To do this, telescopes like our partner LCO carry out automatic surveys of the entire sky each night, to make sure you, me and the rest of humanity don’t become cosmic target practice.

Some asteroids are so big they have their own moons! 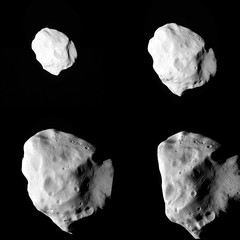