Imagine an advanced alien race discovers our little blue planet and decides to send a probe to study us for a day. Using a giant scanning device that can take images of the entire Earth, they collect huge amounts of data during their short visit. Many of the pictures are of us; humans going about our daily lives.

What could this snapshot possibly tell them about us? One day is far too short to observe a single person be born, grow old and die. But the aliens would see children, adults and old people. All of these moments could be pieced together to understand the lifespan of a human.

Astronomers understand that a lot can be gained by a snapshot — they do the exact same thing with stars.

Compared to stars, humans have only been around for the blink of an eye. Stars live for thousands, millions or even billions of years. So, we can’t possibly witness the birth, life and death of the same star. However, we can observe stars at different stages of life.

The picture above was taken with an X-ray telescope. While it might not look like anything special, this picture of space includes every possible stage of a star's life: beginning, middle and end. It's like a family photograph!

The bright point of light at the centre of the picture is Cygnus X-3 (“sig-nus”). It includes two objects circling each other; one is a middle aged star, the other is what remains of a massive star that died. We call this type of object an 'X-ray binary system', because it shines brightly in X-ray light.

To the left of the picture is a cloud of cosmic gas and dust where new stars are forming. Astronomers were quite baffled by this picture, because this type of star-making cloud has never been seen giving off X-rays before.

But it turns out they needn’t have worried, the cloud is simply acting as a mirror, reflecting the X-rays shining from Cygnus X-3.

The bigger the star, the shorter is its life. This is because larger stars consume their fuel much faster than the smaller ones. 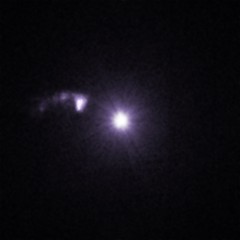