What makes a planet “Earth-like”?

We’ve now found over 3,500 planets around distant stars. Many of them have been described as rocky and “Earth-sized”, but that doesn’t mean they’re anything like our home.

To help us better understand the different kinds of small, rocky planets astronomers and geoscientists (people who study rocks) have joined forces. They are looking at the mix of materials inside stars, to find out what this tells them about their planets.

Differences in the make-up of these stars and planets could have important consequences for their chances of hosting life.

Out of 90 stars that were chosen for this study (because they probably have rocky planets around them), one particular planet was interesting. The scientists nick-named this planet “Janet” and it has a star containing lots of a chemical called silicon.

More than a quarter of Earth is made up of this chemical, for example, sand is made of silicon. But looking at Janet’s star, the planet probably contains much more silicon than Earth.

If Janet does contain more silicon than Earth, it would make it less likely to have what we call 'plate tectonics'. Plate tectonics (pronounced 'tek-TON-iks') are thought to be essential for life.

The continents on Earth are actually separate pieces of rock that move around, even under the oceans. This is called Plate Tectonics.

It causes all kinds of natural wonders, such as volcanic eruptions which pour molten material from underground onto Earth's surface. This material actually adds oxygen to our air supply, helping us survive.

Looking at the material in stars this way could help us choose which planets to pick for future missions in our search for alien life.

Tectonic plates move around 6 inches per year. The movement can be tracked using GPS satellites!

This Space Scoop is based on a Press Release from Sloan Digital Sky Survey. 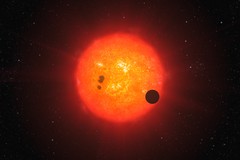