Life in the Universe doesn’t necessarily mean aliens – it could mean us.

So far, no extraterrestrial life has visited the Earth, but humans haven’t traveled out into the Universe either. Will we ever have the chance to leave our Solar System and explore deep space?

If we did, the obvious destination would be the nearest star to our Solar System, Proxima Centauri.

With current rocket technology, it would take us tens of millions of years to reach the star. But a new project, called the Starshot Project, plans to lower the travel time to just 20 years.

Using dozens of powerful lasers scientist plan to propel miniature space probes towards the star at speeds of about 60,000 kilometres a second. At that speed it would take less than 7 seconds to get to the Moon!

But is Proxima Centauri even worth visiting?

With every new picture, it seems the space around this star grows more interesting and exciting. Last year a rocky planet similar to the Earth was discovered orbiting the star. Recently, we discovered that the star was surrounded by loops in space called “dust belts”, filled with fragments of rock and ice.

Dust belts are surprisingly familiar, our own Solar System is home to two such regions called the Asteroid Belt and the Kuiper Belt. These areas contain the spare parts of our Solar System, material that did not form into larger objects such as planets or moons.

These rocky belts tell us that Proxima Centauri is probably home to more than just a single planet, even though that’s all we’ve been able to detect so far.

The discovery will also help with the future Starshot Project. A precise knowledge of the space around the star is essential for planning a safe and successful mission.

The pieces of rock and ice in the dust belt around Proxima Centauri are very similar to those in our Asteroid Belt and Kuiper Belt. They vary in size from the tiniest dust grains up to rocks many kilometres across. 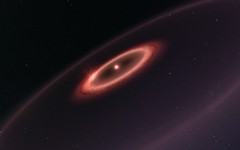 eso1735a
Our Nearest Star is Looking More and More Familiar