Do you live in a part of the world that experiences snowstorms or dust storms? For most of us extreme weather like a sudden blizzard can have a huge impact on our daily lives. Snow and wind can stop transport and knock out power, heat and communication, sometimes for days at a time.

Between 2014 and 2016 the Rosetta spacecraft flew alongside Comet 67P. During these two years, Rosetta faced something similar to the extreme weather we can get on Earth.

This picture was taken by Rosetta during its flight beside Comet 67P. Although it may look like a snowstorm, what we’re seeing are actually grains of cosmic dust passing in front of Rosetta’s camera.

Comets are sometimes called “dirty snowballs” because they’re made of ice and dust. When they travel close to the Sun the heat warms their surface and causes ice to evaporate into space, carrying dust along with it. Travelling so close to Comet 67P Rosetta faced a number of these storms and beatings from dust grains.

But despite its dangers, the dust is extremely interesting to scientists back on Earth. During its lifetime, Rosetta studied tens of thousands of dust grains, providing information that is helping scientists to understand the building blocks of the Solar System.

Like many spacecraft, Rosetta used the stars to navigate. However, the star-trackers occasionally locked on to dust grains thinking they were stars! 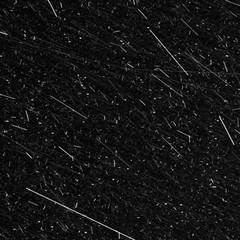