A third of the world’s population are “immigrants”, people who have moved from one place to live in another. There are plenty of reasons people move home, they might relocate for work, in search of freedom or they might be escaping from natural disasters.

Now, for the first time a permanent immigrant has moved-in from a different Solar System!

The asteroid, which is currently nestling in Jupiter’s orbit, is the first known asteroid to have been captured from another star system.

While all of the planets in our Solar System (plus most of other objects as well) travel around the Sun in the same direction, this asteroid is different – it travels in the opposite direction.

If it had been born in our Solar System, we’d expect to see the asteroid moving in the same direction as everything else born here. The fact that it isn’t going with the flow tells us it must have been captured from another system.

While we’ve spotted interstellar visitors before, these were just tourists passing through, whereas the new asteroid is a long-term resident. Our Sun initially formed as part a tightly-packed group of stars, each with its own solar system full of planets and asteroids. These cosmic siblings lay close enough together that the strong gravity of our Sun and planets managed to attract and capture this asteroid from another system.

Today it's impossible to tell exactly which stars in the sky are siblings of the Sun. The cluster simply fell apart as each star raced around the centre of our galaxy, like runners falling from the pack. 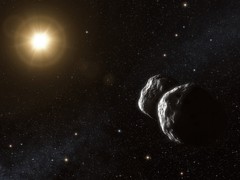